This is the first page of our long list of short rabbit breed descriptions. It is our table of contents linking you to history, breed information, and pictures for many of these breeds.

You'll find alphabetized breed descriptions starting with A through K below.

If the rabbit breed title is a link, you can follow it to our short rabbit breed information page with photo.

Or, purchase our complete Domestic Rabbit Breeds e-book here or below.

If the breed is recognized by the ARBA, our All Rabbit Breeds page will provide a link to the breed's national club, if available, where you will find even more info, including breeder lists.

Skip A-K, and go to rabbit breed descriptions from L to Z

Enjoy these rabbit breed descriptions from A to K!

Altex
Not a show breed, but a purebred Terminal Sire rabbit for commercial meat use originating in the USA.

Angora, English
English Angoras have been bred in England for their wool for over 500 years. They weigh up to 7.5 pounds (3.4 kg).

Angora, French
French Angoras are considered the original (oldest) Angora breed, having short fur on the face. They weigh up to 10.5 pounds.

Angora, German
The German Angora is an English Angora that has been selectively bred for greatly increased wool production.

Angora, Giant
The Giant Angora originated in the USA, weighs a minimum of 9.5 pounds, and has the attributes of large German Angora rabbits.

Angora, Mini English
These New Zealand bred rabbits are a scaled down version of English Angoras, weigh less than 2 kg (4.5 lb), and are very rare.

Angora, Satin
The Satin Angora is a French Angora with satinized wool weighing up to 9.5 lb (4 kg).

Argente, Clair
The Argente Clair is a heavily silvered blue, called Light Groot Silver in Germany. They weigh up to 5.5 kg (12.5 pounds).

Argente, Crème
Argent Cremes are a moderately silvered orange rabbit, raised in France, the UK, and the USA, where they go by the name Crème d'Argent.

Argente Noir
The Argente Noir is a Dutch version of the Champagne d'Argent weighing 2.72 kg (6 lb). 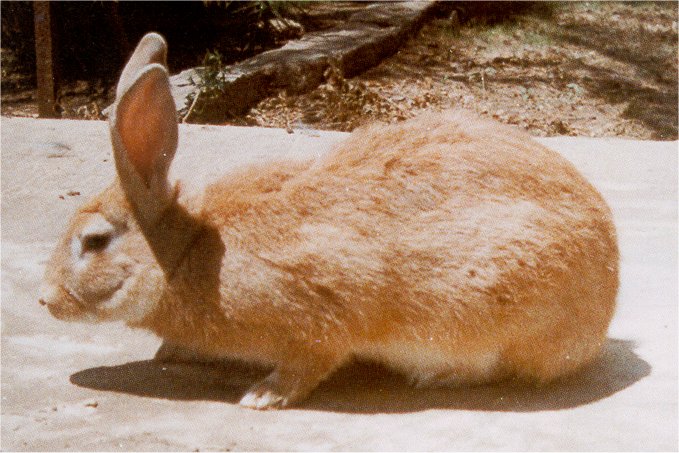 Baladi
The Baladi originates from Egypt, the result of crossing native rabbits with Flemish Giants in order to create a heat-resistant meat rabbit. They weigh around 2.7 kg (6 pounds).

Beige
The Beige is a lilac-colored rabbit weighing up to 6 1/2 lbs known in the UK and Sweden.

Belgian Silver
The Belgian Silver is a moderately silvered black rabbit favored in Belgium weighing up to 5.5 kg (12.25 pounds).

Blanc de Vendee
The Blanc de Vendee is a prolific white breed with short, dense, furrier-pleasing fur. It weighs about 3.5 gm (7.75 lb), and is rare.

Blue of Ham
The large Blue of Ham represents many good rabbit traits in this single breed weighing a maximum of 6 kg (13.25 pounds).

Sherwood Forest Feeds: The best there is on the market, currently.
Adult rabbit feeds available in 4.5 lb and 10 lb bags.

Brazilian
Brazilian rabbits are European domestic rabbits, probably brought to Brazil long ago by Portuguese sailors.  They are hardy in heat and cold, thrive on poor forages, and are naturally docile; they weigh 7-11 pounds (3.175 - 5 kg).

Britannia Petite (Polish in the UK)
Britannia Petites are a tiny arched breed weighing no more than 2 1/2 pounds, and is presented standing up on its front paws.

Chaudry
The Chaudry is a prolific French commercial rabbit with a minimum weight of 4 kg (8 3/4 pounds).

Checkered Giant
The Checkered Giant is a very large spotted rabbit with markings standardized in the USA as shown. There is no maximum weight requirement.

Chinchilla, American
American Chinchillas have the chinchilla fur and coloration in a larger meat rabbit body. They weigh between 9-12 pounds.

Chinchilla, Giganta
Chinchilla Gigantas are the European version of the Giant Chinchilla rabbit, however possibly even larger. See Chinchilla Rabbits for more info.

Chinchilla, Giant
The Giant Chinchilla is giant meat rabbit, with commercial value being a prime consideration. Maximum weight is listed as 16 pounds.

Chinchilla, Standard
The Standard Chinchilla originated in France and was at the time a meat rabbit. They weigh up to 7 1/2 pounds.

Cinnamon
The Cinnamon rabbit is a meat rabbit breed with dark tortoiseshell coloration. Cinnamons weigh up to 11 pounds.

Criollo
Criollos are a domestic rabbit found throughout the rural areas of Mexico and probably other South American countries. They have become acclimated to tropical heat.

Cuban Brown
The Cuban Brown rabbit is a self chocolate rabbit, the description of which closely matches Havana rabbits.

Czech Spot
The Czech Spot are marked similarly to the larger Checkered Giants. They weigh 3 - 4 kg.

Deilenaar
The Deilenaar is a Dutch meat breed with a special ‘warm red brown’ coloration. No weight limits are noted in the BRC standard of excellence.

Dutch
Dutch rabbits are specifically marked with a white saddle, blaze and white feet. They weigh up to 5 1/2 pounds.

Dwarf Hotot
Tiny all-white rabbit with a 1/8th inch band of black around the eyes. The Dwarf Hotot weighs a maximum of 3 pounds.

Flemish Giant Rabbit
Flemish Giants weigh a mammoth 14+ pounds (6.36 kg) with no maximum constraints, and have contributed their genes to various other huge breeds.

Flemish Giant (British)
British Flemish Giants are smaller than the Flemish of the USA and Europe, and weigh a minimum of 11 pounds (4.97 kg).

Furless
Furless rabbits have very little fur, and were developed in order to improve survival in hot tropical climates in developing countries.

Gabali
Gabali rabbits are native to Egypt and the Sinai. They are adapted to heat, and weigh on average 3.3 kg (7.26 pounds).

Geant Hongrois (Hungarian Giant)
The Hungarian Giant is related to the French Lop and Flemish Giant. It weights up to 7 kg (15 1/2 pounds).

Giant Blanc du Bouscat
The Giant White of Bouscat has silky, frosty fur and weighs up to 6 kg (13.25 pounds).

Giza White
Giza White rabbits are native to Egypt and selected for albinism. They weigh on average around 2.75 kg (6 pounds).

Gnomish Giant Rabbits
Very large rabbits under development outside the ARBA. A weight of 16 pounds is targeted, but they typically weighs 11-13 lb for now.

Harlequin (Japanese)
The Harlequin rabbit has a patterned coat with alternating colors on head, ears and body bands (pictured). Harlequins weigh up to 9.5 pounds (4.32 kg).

Havana
The Havana is a rather small, originally chocolate-colored rabbit with beginnings in Holland (not Cuba). They weigh up to 6.5 pounds (3 kg).

Hermelin (German Polish)
The Hermelin rabbit is Polish rabbit breed in Germany. They come in REW and BEW, and weigh up to 1.5 kg (3.3 pounds).

Himalayan
The Himalayan is long and snaky in body, white, with black at the points. They are small, weighing up to 4 1/2 pounds (2 kg).

Hulstlander
The Hulstlander is a very small Blue-Eyed White rabbit related to the Netherland Dwarf.

Jamora
The Jamora is a German wooled creation with wool in an ideal harlequin pattern. It weighs up to 2.5 kg (5.5 pounds).

Jersey Wooly
Jersey Woolies are the result of putting wool on a pet-sized rabbit. They weigh up to 3 1/2 pounds (1.59 kg).

Kabyle
The Kabyle is an Algerian combination of several commercial meat rabbit breeds. Kabyles are medium sized and heat-resistant.

Kanel
The Kanel is a chocolate tortoiseshell rabbit recently developed in Denmark from crossing Thuringers and Havanas.