Californian Rabbits are a favorite choice for commercial and backyard meat rabbit production. Learn the history, traits, standards, and more.

Californians were indeed created and bred in California.

The year was 1923.  George S. West was a Kansan who had moved to Lynwood in Southern California. Being a rabbit fur buyer, he heard the stories from the breeders of up to a half of each NZ litter being ‘woolies’ - New Zealands with recessive wool coats due to the angoras that had been used in the early part of the 1900’s to improve the density of the New Zealand fur.

Also being a commercial rabbit breeder with some pre-veterinarian and genetics training, Mr. West was ideally suited to take on the challenge of a breeding program designed to create the ‘perfect’ meat rabbit with dense desirable fur.

Standard Chinchilla rabbits and Himalayans were chosen due to the various qualities of the fur. Five years of persistent breeding finally produced a small, chinchilla-colored male prototype with all the correct fur traits. This buck was then line-bred with Mr. West’s several hundred recessive-angora-free New Zealands in order to put commercial meat bodies inside those pelts.

Interestingly, despite heavy demand for Mr. West’s new "Cochinelle" rabbits, as they were called initially, he refused to relinquish any breeding stock except to two well-trusted Southern California breeder friends of his. The two breeders together with Mr. West pursued the vision for the breed for another couple years. The three breeders, Mr. West, Mr. Wesley Dixon of Glendale and Mr. Roy Fisher of Pomona, together were instrumental in perfecting the Californian as we know it today.

For more information about the Californian breed, check with the National Californian Rabbit Specialty Club. 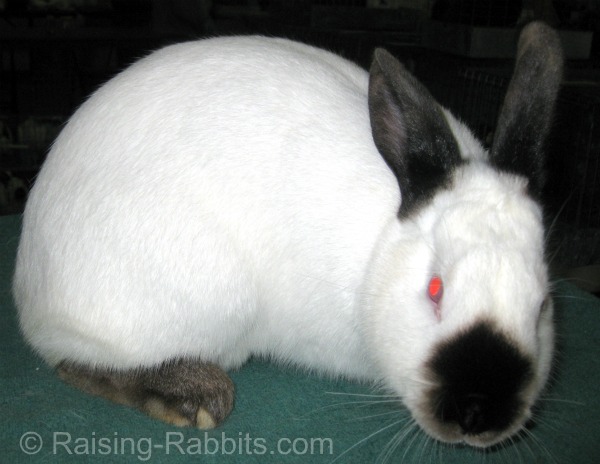 The Californian has the consummate commercial meat rabbit body. It is very muscular, full in the shoulders, and as deep as it is wide in the hindquarters. The usable pelt is completely white, while the points retain the Himalayan coloration.

The fur is dense and coarse enough to be described as a fly-back coat, and the undercoat should be very dense.

The UK standard offers no upper weight limit, however lists 9 1/2 pounds (4.309kg) as the desirable weight.

Californians have red eyes and very dark, almost black, points - nose, ears, feet and tail. Any color on the usable portion of the pelt is a disqualification from the show table. This can be tricky, since the pigment is temperature sensitive - colder climates may induce ‘smut,’ or coloration, where it does not belong. A molt can, however, remove the tinted fur, which will grow back white once again under correct conditions. 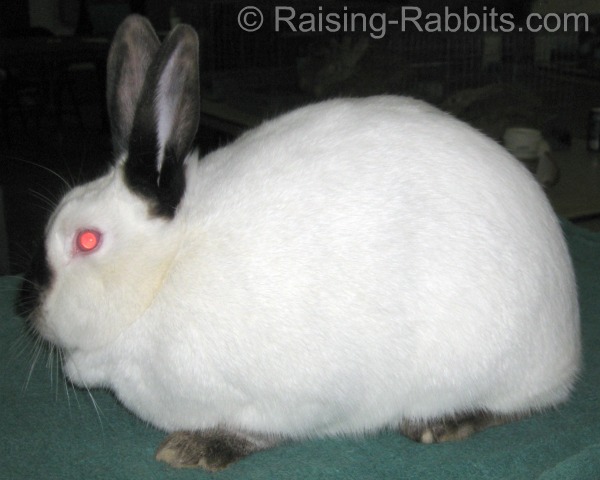 Californians weigh slightly less than New Zealands. Since both breeds are heavily utilized for the meat industry, commercial production breeders frequently cross-breed these two breeds to achieve hybrid vigor and a reduced time to market. The result of cross-breeding are offspring with points that are significantly lighter in coloration.

If available, the Altex "terminal cross" can also be used. Learn more about terminal crosses at Altex Rabbits.