These animal rights articles will address

Trying to discover the whole TRUTH about the Animal Rights Agenda is like going on a scavenger hunt. You won't find all the clues in one place, unless you stumble across a website like ours with a page like this that does some of the searching for you. Even so, we're not confident that we have ALL the damning evidence.

We are all for animal welfare.

But welfare is not what the animal rights agenda is about. Hard-core animal-supremacists know exactly what their goals are: The complete abolition of all uses of animals across the globe.

http://www.americanssupportinganimalownership.com/index.html - Recommended animal rights articles defending the right of people to own and utilize animals.

House Rabbit Society - The HRS presents itself as a champion of pet rabbits. But reading the fine print in their Philosophy Statement may open your eyes to their true intent. (Hint: This activist organization thinks you are "exploiting" your rabbits, and hopes the day comes when no one has any more pet rabbits.)

Rabbit Rescuer - A rabbit rescuer asks a perplexing question: "WHY wouldn't they take our offer of money and let us keep the stolen rabbits?" Here are some answers...

Against Animal Rights - A shocked reader chewed us out, suggesting we exploit animals. This is our answer, explaining symbiosis, and showing that a vote against "animal rights" is actually a pro-animal vote.

http://www.abolitionistapproach.com/the-paradigm-shift-requires-clarity-about-the-moral-baseline-veganism/ - Here is the true agenda of the animal rights gang, an ideological war that hinges on Veganism. This is a religion, and has nothing to do with the ethical treatment of animals in the slightest. (That's just another smokescreen, and sorry, we don't want to honor their site with a link).

Rabbits Should NOT Be Farmed! - This is a profanity-bleeped conversation - one opinion and several rebuttals (not just ours) stating that rabbits are prey for all predators, including humans, which are apex predators.

Raising Rabbits Again - A vegetarian family returns to raising rabbits and to an omnivore diet with gratitude to the animals that make their lives healthy.

Easter Rabbit - What is the actual truth about Easter bunny abandonment percentages? 95% or 2%? (Link opens a PDF in a new window)

Animal Rights in the Animal Kingdom - Take a look at the right to live or die from the standpoint of the Serengeti.

Animal Ethics - Is meat murder? A sociologist looks at the ethics of producing and eating meat.

Symbiotic Relationships - A major example of symbiosis is the symbiotic relationship between domestic animals and the humans who farm them. Each species needs the other for survival. Yet thousands of other fascinating examples exist between dissimilar creatures in the animal kingdom, including fungi that 'farm' animals, and more. 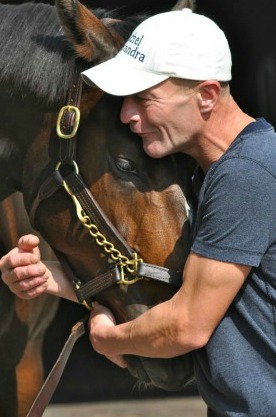 In our opinion, symbiosis disproves the vegan 'thou-shalt-not-eat-meat-because-it's-cruel' propaganda. 6,000 years of human history is evidence of the deeply rooted genetic instincts, and indeed, bodily requirements, that drive humans to eat meat and to nurture, protect and shelter the herds of animals that provide that meat.

Symbiosis between humans and their work-animals: The affection in this picture is clearly a two-way street. According to the Stonestreet Farms Facebook page, the Horse-of-the-Year mare Rachel Alexandra lowered her head affectionately into jockey Calvin Borel's arms. While horse racing may not be classified as 'work' (though a lot of work goes into the 'sport'), both racing and rodeo undoubtedly have roots in ranch remudas and the affection shared by horse and cowboy.

Another example of symbiosis is the critical interdependence between herbivores and their digestive bacteria...

Carnivore Digestive System - A comparison of the anatomy of herbivore, carnivore and omnivore (human) digestive systems. Under which classification do humans rightly fall? In our view, the whole animal rights platform stands or falls on the answer to this single question.

Herbivore Digestive System - A comparison of the physiology of herbivore vs human digestion. There isn't a human on earth that practices cecotrophy; how in the world can you tell me that humans are non-ruminant herbivores?

If you're willing to take a look, the evidence is unmistakable: Humans require animal nutrition for wellbeing and ultimately for their most basic survival.

Vitamin B12 Deficiency - It will likely take several years, but without eating animal products, or without supplementing the diet with Vitamin B12, humans eventually become very sick, and then die. (There are NO active sources of Vitamin B12 within the plant kingdom - animal nutrients are our only source of B12; even "vegan" B12 supplementation must be fortified with animal-source B12.)

Animal Abuse Facts Glossary - We all occasionally twist the facts of a story when we need to make a point. The animal supremacists just do it REALLY well. Next time you read a story containing animal abuse "facts," read it with this animal abuse facts glossary in mind. Your understanding of the true facts of the case may be MUCH closer to the reality of the case.

Scrupulously documented info on Animal Terror - The FBI calls it Animal Enterprise Terrorism, and if they catch you terrorizing animal enterprises, you go to jail. The link takes you to a whole catalog of animal rights articles related to animal rights terrorism.

200 Rabbits Seized - The entire herd of a legitimate, reputable show rabbit breeder was seized illegally in July, 2011, by the animal rights organization known as the House Rabbit Society. Circumstances were extremely suspicious...

Animal Cruelty Cases - Animal rights assaults on responsible animal owners in order to reduce the ranks of breeders and to make money. See if you don't also start to see the trends.

Dollarhites have a signed settlement with USDA - December 2011 - "'We have a signed settlement with USDA,' said Judy Dollarhite in a Facebook post emailed to the Headliner News. 'It isn't everything we had hoped for because there wasn't an apology included for all the nightmares we have endured these several months. There is no ($92,000) fine. They stipulated a two-year ban on obtaining a USDA license, which we never wanted, nor can I ever envision us wanting anything to do with USDA.'"

Our animal rights articles are intended to educate, to reveal the actions and true intent of animal rights extremists, which is to fund their extremism while eliminating the use of animals altogether. That is, after all, their avowed goal.

LAST but NOT LEAST...

United Nations AGENDA 21 - Are the world's invisible movers and shakers secretly plotting to CULL humanity to a maximum population of 500,000,000? What do you think of the evidence that is carved in granite and open to view?

Animal rights and animal rights articles could be just a smokescreen. Might your own life eventually be superfluous? (He that has an ear, let him hear...)