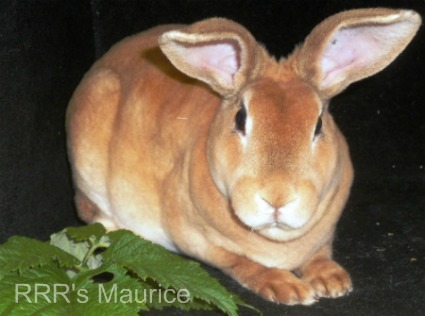 Raising Rabbits Again. Lacto-ovo-vegetarian family returns to raising rabbits and omnivorism with gratitude to the animals that make their lives healthy.

(The following article was written by Caroline, who raises Rex rabbits with her family in California. Pictured is their Amber Rex buck.)

I'm raising rabbits once again after a decades-long hiatus.

Years ago, when I had young children, I kept the whole family busy with milking goats, raising chickens and rabbits, 4-H, gardening, canning, and all the things that young families spend time doing.

In those days we were vegetarians.

Our decision to become vegetarians was primarily related to wanting to live a more "healthy" life. This was in the ‘70s and so much information was being shared about the effects of the chemicals that were fed and administered to animals and what happened to humans who ate those animals. There were also exposés being written about the inhumane way that many "factory-farm" animals were being kept. We had a young child and it just seemed like it was easier and more economical to eat a vegetarian diet. So we did for a couple of years.

After the second baby was born we found a place that had acreage and room for us to plant an orchard, which was the first thing that we did. We also started a small vegetable garden and decided to get a goat so that we could have milk that came from an animal that was fed a diet free of hormones and other chemicals that we didn’t want our family to be ingesting.

The family that we purchased our first 2 goats from had children who were older than our one and four year old daughters. That family’s kids were all in 4-H and in addition to their dairy goats they raised lambs and pigs.

After the county fair, we were invited to a "pig party" by that family, where several families helped each other slaughter and butcher animals that they had raised. I told them that we were vegetarians. They didn't care.

"Don't worry," they said. "There will be plenty of pot luck food to choose from. Come on over anyway." So we did.

We saw that it was possible, even fun, to raise our own healthy and well cared for animals. We soon reevaluated our vegetarian status. It wasn’t that a dislike of meat had led us to becoming vegetarian in the first place.

One after another we acquired a couple of sheep, a drop calf, some rabbits, a flock of chickens and a few turkeys.

Over the years, with the help of this group of families and a variety of books, we learned to slaughter and dress a wide variety of animals; to make sausage and cheese and jam; to build feeders and reach inside a laboring goat to untangle a set of quadruplets; to recognize the signs of heat in a goat and how to groom and present that same goat to her best advantage in a show ring.

Well those [human] kids, as well as two more, grew up and moved out into the world as adults. For some years, as they were leaving home, we took a break from the intensity of animal husbandry and concentrated on other things.

In the last year or so, as the weeds and poison oak began to retake the pasture and cobwebs filled the rabbit cages, we realized that there were a lot more boring ways to spend our time and money than in tending animals that would offer us things like:

So, we have repaired the fences and repopulated the pasture and filled up the cages.

We're raising rabbits again, and then some

Just yesterday I announced to my husband, "Can you believe that we have 85 animals on this place?" He had to stop and think about it. Sure enough, when I added up the 40 rabbits, 20 sheep, 10 ducks, 7 geese, 4 goats, and 4 LGDs, there were 85. And I just remembered that I forgot to add in the 3 cows!

I Say My Thank You's:
So this morning after we had done our morning patrol of the pasture with the 4 dogs, since it was foggy and cool, I decided to dispatch a group of fryers in the most crowded pen. I thought back to the time 34 years ago when I went to that first pig party and offered "thanks" to that group of families who had mentored us.

And I said "thank you" to each bunny as I took it out of the carrying cage and ended its short life.

I do this every time.

Explore the Raising-Rabbits Store for your rabbit supply needs

Thank you to Caroline for sharing her story about raising rabbits again with the visitors to Raising-Rabbits!