This Herbivore page explores the digestive processes of both cows and rabbits, two different types of herbivores. It is helpful for rabbit owners and breeders to better understand how the rabbit's digestive tract works.

(Advisory to readers: the content on this page does contain photos of animal anatomy in the interest of scientific accuracy. Some people may find these images disturbing. The animals in the photos were treated with dignity and respect in life, then culled using quick and humane methods to spare the animal physical and emotional suffering.)

But additionally, it is important that a website advocating the eating of meat (including rabbits) provide the evidence for humanity's physiological need to eat animal based nutrition for health and survival. Therefore we'll also contrast the digestive processes of plant-eaters with those of humans.

It's all there and evident in the differences in basic biology. If you're unsure about the ethics of eating meat (including rabbits), we hope this info will help.

Both types obtain 100% of their food from plant forages. But unlike humans, both types of herbivores gain a significant part of their nutrition directly from the digestion of billions of bacteria inhabiting their one or more stomachs. Here is how they obtain that extra nutrition.

Ruminants (i.e. cows, sheep, goats) have 4 stomachs and chew their cud. (Take a look at Carnivore Digestive System for a refresher on the anatomy of the cow's digestive system. No, cows aren't carnivores.)

The bacterial counts in a cow’s first 3 stomachs are astronomical. No digestion occurs in these first three stomachs, so the bacteria there can keep right on multiplying and feasting on cellulose, breaking it down for the cow. The bacteria are an essential part of the cow’s ability to eat only plant matter, as the bacteria breaks the cellulose down into easily digestible carbs that both the cow and the bacteria and other microbes can utilize for nourishment. 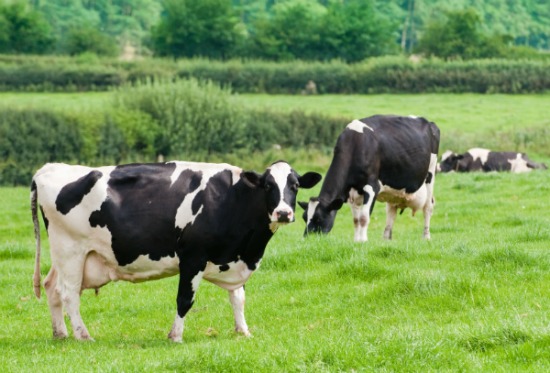 To increase their digestive effectiveness, ruminants regurgitate what they just ate into their mouths and chew their cud whenever they are not actively foraging. This provides prolonged opportunity for the cow to grind the plant matter into ever tinier pieces to improve the ability of the bacteria to digest the cellulose.

When stomach #3 finally empties into stomach #4 for the actual digestion, it delivers up its billions upon billions of bacteria to digestive acids and enzymes, which kill and break down the bacteria. Cows gain a cornucopia of bacterial (non-plant) nutrients, including protein and the elusive B12, from these many kilograms of bacteria. 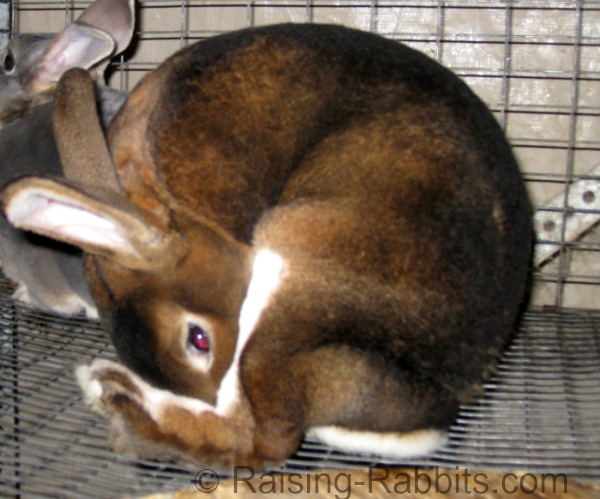 Rabbits don’t chew the cud, but they do send their food through their intestinal tract twice using a completely different mechanism than that of cows and some other herbivores.

On the first transit through a rabbit's guts, the food matter travels the length of the small intestine, finally arriving in the rabbit’s cecum, or hind gut. The cecum is a blind pouch twice or three times the size of the stomach and situated at the junction of the small and large intestines. The cecum holds the rabbit’s enormous population of healthy gut bacteria that break down all the cellulose. Within the cecum, muscle action segregates the heavy, low-nutrient fiber from the high-nutrient, bacteria-laden, digesta. The fiber then becomes concentrated and shuffled off into the colon, where it ends up defecated as the familiar hard round droppings. 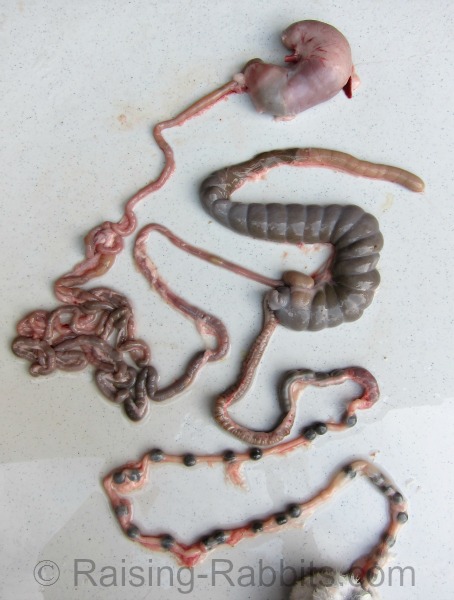 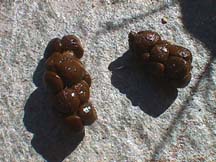 When this process is concluded, the remaining highly nutritious contents of the cecum get their turn for a second transit through the rabbit’s intestinal tract. On their way from the cecum to the colon, the soft cecal contents get wrapped in a mucus membrane and collected together into mushy, raspberry-shaped “cecotropes.”

As though a switch was thrown, cecotrope after soft cecotrope now pass single file down the colon to the anus. The rabbit puts its nose to its privates and eats these soft cecotropes directly from its anus, swallowing them whole. (Humans: don’t try this at home!) 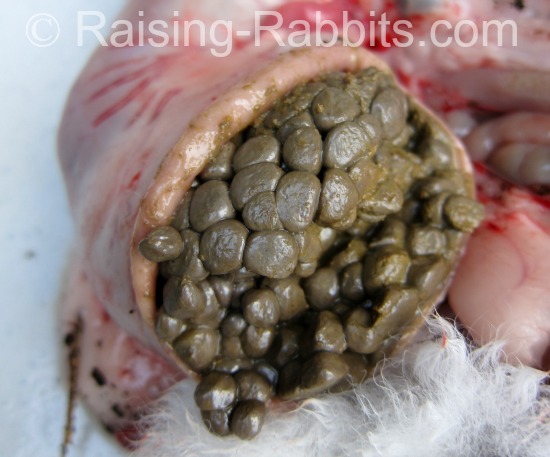 (Pictured: A rabbit stomach is cut open to reveal that it is almost entirely full of ingested cecotropes which have been swallowed whole.)

Bacterial protein content in the cecotropes as a percentage of the total consumed protein ranges between 30% and 68%, depending on the quality of the rabbit’s feed or forages. The ability of the rabbit to recycle its cecum contents and gain nutrition from the bacteria in its cecotropes is known to help correct nutritional shortfalls of various forages.


Does the Human Digestive Process Really Function Like an Herbivore's?

I ask, because I've heard from folks that insist humans are mono-gastric herbivores.

These are profound differences between humans (omnivores),
and true herbivores.

Armies of bacteria are active participants in an herbivore’s digestive processes, and then whole regiments of those armies are killed and digested by their plant eater hosts. Humans will never get that advantage.

When you look at it that way, herbivores are not truly vegan after all, despite eating only plants.

See Carnivore Digestive System for a comparison of the anatomy of ruminants (cows), non-ruminants (rabbits), carnivores (dogs), and omnivore (humans).

See Vitamin B12 Deficiency to better understand the role of Vitamin B12 and its absence in plants.