When No Kill Shelters
are No Good

No Kill Shelters. This is a pictorial argument for appropriate pet euthanasia, especially as regards sick rabbits. No kill is sometimes no good; sometimes it is appropriate to euthanize a sick or vicious rabbit. (This article does not address or apply to dogs/cats.)

The ‘no kill’ philosophy is a logical offshoot of the vegan mindset. If a person loathes the thought of killing for dinner, it makes sense that one would also loathe the idea of dispatching a discarded pet rabbit.

Respectfully begging your pardon, some rabbits should be euthanized.

Problems can arise with any animal, making it no longer fit as a pet.

Not all pet rabbits turn out to be suitable as pets. Euthanasia is a reasonable and humane response when rabbits prove themselves to be either chronically sick or unfit as a pet.

This is what is wrong with
No Kill Shelters

Sick, infectious, cranky, and dangerous rabbits deposited at no kill shelters continue to spread their germs or viciously threaten the shelter personnel who care for them.

This puts pressure on the shelter to adopt out unpleasant or sick rabbits to unsuspecting individuals who may not realize the full implications of the purchase of sick or mean rabbits.

Here is a picture of a sick rabbit that was available for "adoption" (read "sale") through PetFinder in August 2011.

Can’t read the description? Here it is: 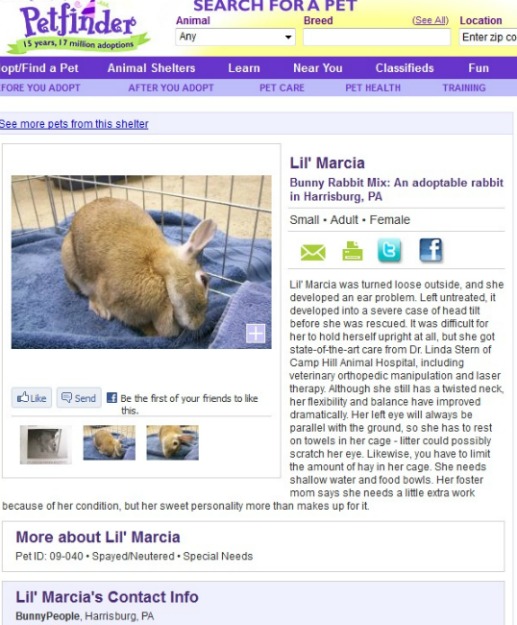 "Lil' Marcia was turned loose outside, and she developed an ear problem. Left untreated, it developed into a severe case of head tilt before she was rescued. It was difficult for her to hold herself upright at all, but she got state-of-the-art care from Dr. Linda Stern of Camp Hill Animal Hospital, including veterinary orthopedic manipulation and laser therapy. Although she still has a twisted neck, her flexibility and balance have improved dramatically. Her left eye will always be parallel with the ground, so she has to rest on towels in her cage - litter could possibly scratch her eye. Likewise, you have to limit the amount of hay in her cage. She needs shallow water and food bowls. Her foster mom says she needs a little extra work because of her condition, but her sweet personality more than makes up for it."

What PetFinder doesn’t tell you: 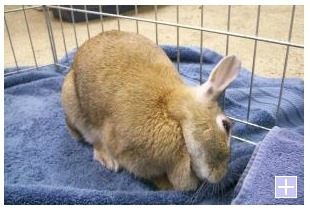 Unless this rabbit has received an ironclad diagnosis, is no longer contagious and no longer ill (though left with wry neck), this rabbit should not be offered for sale, not by PetFinder, and not by a no kill shelter.

But if it is, the offering should come with a FULL DISCLOSURE similar to the above ... including all that will be entailed with its care, including the likely vet-dollars you’ll end up spending on this rabbit per month.

Any lack of FULL disclosure is, frankly, criminal.

Sure, purchase "special-needs" rabbits from no-kill shelters, if you like. But ask the important questions, get the important answers, and go into it with your eyes fully OPEN, trying not to get too attached to the rabbit emotionally.