This page is dedicated mainly to rabbit breeders. Because Pasteurella multocida is such a persistent germ, the page ends up painting a bleak picture for the survival of sneezing rabbits.

If you are a pet rabbit owner with sneezing rabbits, you'll find info that is a little more hopeful at My Bunny, "Sugar," Recovered from Pasteurella.

If several treatments fail to cure your pets, then return to this page to better understand why.

Pasteurella multocida is a nasty little germ.  When a rabbit comes down with symptoms from this bacterium, the vet calls this disease Pasteurellosis, the general term used when the rabbit’s immune system has been overwhelmed with P. multocida.

The leading researchers believe that 100% of rabbits, or at least 100% of rabbitries, have been exposed to Pasteurella (Rabbit Production, Sixth Edition, pg 213).

The germ is everywhere in the rabbit world; the best protection is boosting the overall health of the rabbits in your rabbitry.

This bacterium is the cause of the respiratory condition known as "snuffles." Snuffles actually describes a symptom, not exactly the illness.  Snuffles are paroxysms of head-jerking sneezing that occur on a fairly regular basis.  The symptom of snuffles is a result of Pasteurella multocida in approximately 90% of the cases. If your rabbit is sneezing, and you see ANY white sticky or clear runny snot in its nose, it’s not a cold, it is probably Pasteurella multocida. 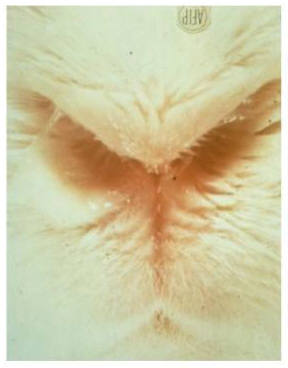 (This picture of a snotty rabbit nose is published by Tufts University.)

I sure hate to be so gloomy about everything!

But don't just take it from me, listen to the rabbit experts: "There’s no such thing as a ‘cold’ in rabbits," is the unequivocal statement in Rabbit Production (p. 213).  "Mucopurulent nasal discharges (pus) that many people attribute to colds are almost invariably caused by P. multocida in conjunction with another bacterium called Bordatella bronchisepticum. This is not a transient condition like a cold, but one with permanent adverse effects on the animal."

What about the 10% of sneezing cases that are not caused by Pasteurella?

Bordetella, Pseudomonas, and Staphylococcus germs might also cause sneezing, as well as a small handful of other bugs. A veterinary diagnosis is a valuable tool.

Before we assume rabbit-sneezing is due to germs, check to ensure the rabbit is not sneezing from environmental causes:

Is your rabbit sneezing? Click here for help determining whether or not the cause is Pasteurella bacteria.

A Whole Repertoire of Trouble
with Pasteurella multocida

Pasteurella ratchets up the hurt in lots of other ways too: 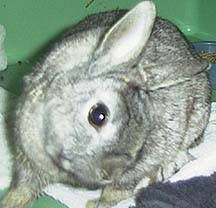 Visit the Long Beach Animal Hospital website for some pretty gruesome pictures of animals with Pasteurella, and some of the surgical procedures the sick rabbits undergo.

(This picture of wry neck is published on their website.)

Dogs and cats are often carriers of Pasteurella multocida, as well as other less common sub-species of Pasteurella. Besides dogs and cats, this bacterium can infect humans and a host of other animal species. It is found around the globe. Check this link for more information about Pasteurellosis in humans.

Most of the time there is no real cure for Pasteurella multocida in rabbits.  Antibiotics suppress the symptoms for the duration of the course of the antibiotics.  Immune system boosting supplements strengthen the rabbit’s health, and the symptoms go away.  However, at the next downturn of the immune system, it all comes right back again.

Pasteurella multocida in rabbits is widespread

Up to 100% of all domestic rabbits might be exposed to or even harboring Pasteurella multocida in their body, but not all of these rabbits are showing disease symptoms.  Many rabbits carry the germ, but are perfectly healthy. Their immune systems have tamed the bugs.

Some vets recognize the huge prevalence of rabbit exposure to Pasteurella bacteria, and no longer recommend culling the rabbit.  Instead, they suggest a treatment protocol.  What ends up happening is that the rabbit gets better... temporarily. And when the wind changes, and the antibiotics run out, it gets sick all over again.  And then it gets cranky, because it doesn’t feel good.

If this is your very favorite pet rabbit, you may indeed choose to try treating the Pasteurella multocida. And we completely understand. But please:

It's okay to euthanize a sick rabbit:

Why is culling important?

The prevalence of Pasteurella germs living inside domestic rabbits (whether or not there are symptoms) is close to 100%.

The idea behind culling our sick rabbits is not necessarily to reduce the prevalence of the germ, but to arrive at overall improved immunity to snuffles across the board in ALL domestic rabbits. Rabbits may always carry P. multocida, but with strong immune systems, far fewer of them would ever get sick.

And isn’t that what we really want - pet rabbits and breeding rabbits that never get sick??

Outwit Pasteurella through a careful breeding program that fixes HEALTH in every rabbit.

Visit our Pasteurellosis page to learn exactly how to
improve rabbit health in your own rabbitry.

BunnyVac - a Pasteurella multocida
vaccine for rabbits in the USA

The BunnyVac might be the best news ever for pet rabbit owners!

The BunnyVac is designed and licensed by the USDA "for use in healthy rabbits as an aid in the prevention of pasteurellosis (snuffles)."

Off-label use as a therapeutic treatment of a sick pet rabbit is also possible, resulting in complete remission of symptoms in rabbits with adequate immune function. Yearly vaccine boosters are needed. Learn much more at BunnyVac.

(I don't recommend the vaccine for show rabbit breeders, who rely on excellent native immunity in their show rabbit stock.)

Your comments or experiences can help others who read them. So, comment away, and if you have pictures, you can post up to four of them. Pictures are always helpful.

(Have questions? Perhaps your question was already asked, and answered, below. If not, Karen has answered hundreds of your questions in her book: Rabbit Raising Problem Solver, covering every aspect of pet rabbit and livestock rabbit care as well as rabbit health and disease. We recommend it!)

Comments from Other Visitors...

Click below to see additional posts that other visitors have made to this page...

Can Staph cause white snot?

I have a friend with rabbits, I was keeping for them.. one of their show bunnies got white snot. I asked them to cull. Instead they put it in quarantine. …

My Bunny Sugar Recovered from Pasteurella

My bunny had Pasteurella and made it thru! we got two bunnies at the same time when they were 6 weeks old. One got sick at seven weeks of age, but not …

I have noticed that many of my rabbits have moisture on their noses. I have one rabbit who we think may be allergic to hay, either that or it has snuffles. …

I feel very informed reading your piece. I have recently lost 4 rabbits to this disease that vets were telling me was vitamin deficiency until I went …

I have a 10 month old Californian doe who has had a white nasal discharge (like milk) for the last 4 months. She is eating and seems normal otherwise. …

My bunny is around 3 months old and has been sneezing a lot lately. He was under antibiotics when the sneezing started because he just recovered from wet …

Robbie Rabbit is about 9 months old and is a neutered mini lop. I have had him for 3 or 4 months and he was a rescue rabbit. He has been very healthy but …

I have been reading your info and testimonials. It's very helpful to a novice like me. We bought a doe and a buck in September to start breeding for meat. …

Rabbit has snot without sneezing Not rated yet
I have a little lionhead buck that at the local show suddenly had snot. I have my rabbitry in my house right next to my room and my room is open to their …

No vaccine for show rabbits? Not rated yet
I am surprised you are not recommending Bunny Vac for show rabbit breeders. Native immunity is a fallacy when it comes to pasteurella. As you pointed out …

Rabbit Experience with Pasteurellosis Not rated yet
I had a disabled bunny I had adopted from the shelter, unfortunately he developed a severe case of Pasturellosis. I originally thought he might be allergic …

White thick discharge Not rated yet
I have had a netherland dwarf female for 5 days, it is 12 weeks old but tiny, the runt. She is beautiful but i think she has pasteurella. A vet prescribed …