Raccoon Roundworms are a dangerous consideration if your rabbit shows evidence of brain inflammation such as stiffening in spasms or seizures, and has contact with the environment, such as your backyard.

Raccoons (Procyon lotor) are encroaching into people-inhabited spaces. They have adapted so well to urban environments that some believe more raccoons live in the big city than in nature at large. Other than knocked over trash cans and a few poops to clean up, people don’t seem to mind.

Why is this important to rabbit breeders and pet rabbit owners?


Because raccoons are reservoirs of the potentially deadly raccoon roundworm, scientifically known as Baylisascaris procyonis.

And because rabbits can be intermediate hosts for the raccoon roundworm, and at the same time can serve as an attractant, drawing the local raccoon population to your property and into the proximity of your children. 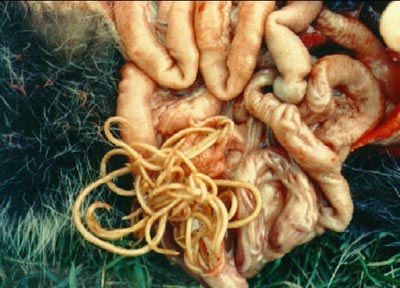 Photo: Raccoon roundworms have filled up the intestines of this dead raccoon. Photo Credit: www.michigan.gov

Baylisascaris procyonis roundworms grow up to 8 inches (20 cm) long, and are less than 1/32 inch (1 cm) thick.

It is now thought that wherever raccoons can be found, so can be found the raccoon roundworm. As of 2002, raccoon populations were infected at a rate of 3.4% to 100%, depending upon the area. Areas of higher incidence were the Midwest, Northeast, and West Coast. The lowest incidence was the Southeast USA.

Raccoon densities in urban and suburban areas have been sharply on the rise. A 2003 research project studying raccoon populations and incidence of B. procyonis in 3 communities in Northern California found that the latrine densities were higher than any previously reported. The same is almost certain to be true in 2012, with even higher densities than in 2003. If you’ve seen one raccoon where you live, there may very well be another 50-100 within your local neighborhood.

The infected raccoon itself usually shows no signs or symptoms of distress. Unless the number of roundworms exceeds the capacity of its intestines and causes a blockage, the raccoon goes about its life shedding millions of eggs every day in its scat.

The eggs then develop inside the bodies of an intermediate host, which might be virtually any animal, including human, that ingests the infective eggs. Mice, squirrels, rabbits, birds, chipmunks, turkeys, dogs, foxes, coyotes and woodchucks are among over 90 species known to be intermediate hosts.

Raccoons defecate in “raccoon latrines” which is exactly what that sounds like – selected spots throughout the raccoon’s territory, which all the raccoons in the area use as their toilet area. One of two of these might be in your own backyard or on your roof. 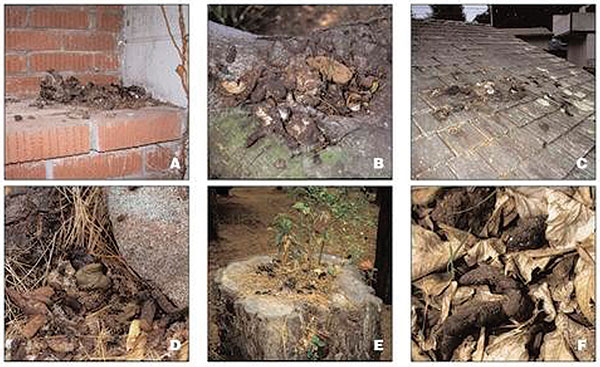 Here are examples of raccoon latrines. Each of these is located in back yards or in public parks (Photo credit: www.cdc.gov):

Raccoon roundworm eggs are sticky - they’ll stick tenaciously to hands, tools, shoes, plants and anything else that bumps into them.

They are also very difficult to kill. A 4 month soak in a vial of formalin does not kill the eggs. Disinfectants are ineffective, although bleach reduces their stickiness. Even if Nature dissolves and decays the material in the raccoon latrine until there is absolutely no evidence a raccoon had ever been there, those eggs will still lurk hidden in the environment, waiting, for the next several years at least.

Once infective eggs are consumed by the intermediate host, they hatch into larvae. But they don’t just hang out in the intestines; they poke holes in the intestinal walls and travel north, through the liver, lungs, and pulmonary veins. Arriving in the heart, they enter the blood stream and gain access to virtually any area of the body. Unfortunately, the eyes and the brains are some of their favorite spots, along with the lungs and liver.

Even when they've left the blood stream, they keep right on growing and migrating, causing inflammation in the tissues where they go, until the host’s immune system can catch up to them and encapsulate them in a hard protective fibrous shell.

Symptoms and Signs of Raccoon Roundworm Infestation in Intermediate Hosts

The symptoms depend on what area of the body has been damaged by the migration paths of the roundworm larvae and the immune system response. The symptoms frequently start slowly and then build in intensity and severity:

The swath of damage caused by migrations throughout the brain triggers an inflammatory response in the brain. Once the infestation is under control, the brain undergoes a second effect – post-inflammatory atrophy. This atrophy, or shrinking of the brain tissue, is the cause of the progressive neurologic impairment and incapacitating disabilities. Animals that can’t function fall easy pray to predators. If that predator is a raccoon, the cycle starts all over again.

The raccoon roundworm has the capacity to infect humans, especially little children!

Below: Check with your vet to determine how to treat roundworm parasites in rabbits.

Rabbits housed in colonies are at risk for ingesting raccoon roundworm eggs if infested raccoons live in the area or if there has been any raccoon latrines on your property.

The risk to the rabbits you keep caged is very slight, unless you are including fresh forages in their diet, such as grass clippings or garden waste that could unknowingly be contaminated with raccoon feces.

Recognize that the potential for infestation in your pet dogs and cats exists, therefore avoid allowing rabbits and dogs or cats to share living spaces, especially when raccoons are known to inhabit your area.

If any of your rabbits begin to show signs of central nervous system involvement such as head tilt, spasms, difficulty maintaining balance, seizures, or coma, and there is any possibility of contact with raccoons through fresh forages or their living spaces, please get a vet’s opinion as soon as possible. Additionally, should that rabbit die, you might want to have the vet do a necropsy to ascertain the cause of death. There will be no eggs or worms in the intestines – you’ll be looking for microscopic larvae in the brain or eyes (or elsewhere), along with evidence of damage such as meningoencephalitis or brain atrophy.

(See Rabbit Illnesses for information about Nosema, also known as EC, another parasitic infection with the potential to cause head tilt and nervous system impairment, including death.)