Baylisascaris procyonis roundworms from raccoons can hurt or kill humans. The danger grows as more raccoons roam urban areas. Learn how to protect yourself, your kids and your pets, including rabbits.

Baylisascaris procyonis roundworms are a dangerous consideration if your rabbit shows evidence of brain inflammation such as stiffening in spasms or seizures, and has contact with the environment.

People sometimes ask: Are there rabbit sicknesses that people can get? It is as yet unclear whether B. procyonis roundworms can be transmitted directly from rabbits to people. But, if your rabbit becomes infested with the raccoon roundworm, then the chances are very great that raccoons and their roundworm-laden latrines may be closer to you than you’d like to think.

Inquisitive children are particularly at risk, since they tend to put things in their mouths.

Most cases of Baylisascariasis occur in children under 2 years old due to pica, geophagia (eating dirt), and lack of hand-washing, and many cases have been fatal. There had been roughly 20 documented cases of death or injury in humans through 2002. Once infected, permanent disability can occur, or death, over a period of roughly 1.5 - 2 years from the onset of the first symptoms.

In 2003, a screening of 389 children aged 1-4 years old in the Chicago region revealed that the immune systems of 31 kids (8%) had responded to a Baylisascaris infection but these kids were all asymptomatic at the time. 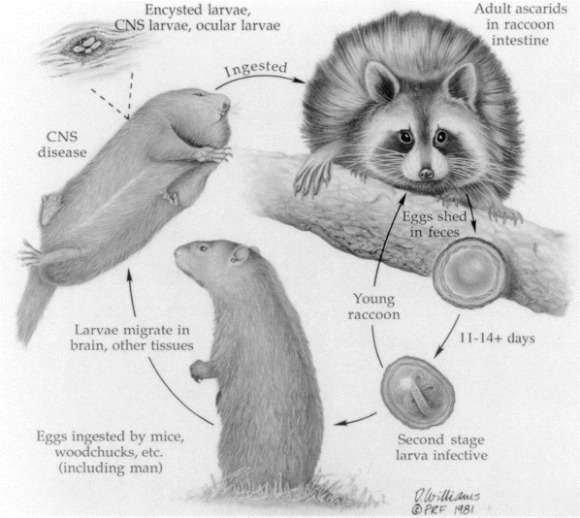 The screening of children in Chicago had been prompted by the discovery of 2 other youngsters in the area with severe brain disease due to Baylisascaris procyonis larval migration.

The neurological symptoms of baylisascariasis range the gamut from asymptomatic, to truly severe nervous system deficits, such as:

Other symptoms depend on the affected area:

The symptoms occur gradually, confusingly, inexorably over months or a couple years until death overtakes the patient or the symptoms finally stabilize (with or without recovery of function). Human infection is still uncommon, but the possibilities are on the rise as the population of raccoons rises.

The Center for Disease Control now advises physicians everywhere to include baylisascariasis in their differential diagnoses whenever the symptoms and circumstances warrant.

"Human clinical infections are uncommon, probably because most persons do not have intimate contact with the sites or exhibit those behaviors (ingestion, pica, geophagia) that would result in heavy infection. Nonetheless, the potential for infection exists, especially for young inquisitive children who might exhibit such behaviors. Moreover, because of the widespread distribution of raccoons, as well as diagnostic difficulties and lack of clinical experience with the spectrum of disease caused by B. procyonis in humans, mild or subclinical infections likely go unrecognized. In fact, asymptomatic, low-level infection with B. procyonis is probably the most common form of infection" (http://wwwnc.cdc.gov/eid/article/9/12/03-0039_article.htm).


Therefore, “for any child who presents with eosinophilic meningoencephalitis and a history of possible exposure to raccoon feces, the possibility of B. procyonis infection should be strongly considered” (http://cid.oxfordjournals.org/content/39/10/1484.full).

In the words of the Oxford Journal:

“B. procyonis infection should be considered in any patient, particularly a young child, with evidence of neurologic or ocular disease, and especially with eosinophilic meningoencephalitis in combination with peripheral blood eosinophilia and a history of possible exposure to raccoon feces. Such patients should be treated immediately with albendazole and steroids” (http://cid.oxfordjournals.org/content/39/10/1484.full).

Discussions centering around human exposure to the raccoon roundworm continually mention the danger of raccoon latrines, around and within which are nearly unbelievable quantities or roundworm eggs if frequented by infected raccoons. That likelihood at any given latrine is greater than 50%.