200 rabbits were seized from Ms. Debe Bell, a Colorado show and livestock rabbit breeder, on July 21, 2011, on the pretext of animal abuse.

But, what REALLY happened?

Our readers need to know that identical tactics are still being used today:
False accusations, with animal confiscation and then extortion tactics to extract the relinquishment of the animals, and then the use of publicity to beg for donations, thereby replenishing the war chests of Animal Rights organizations so they can then go after their next (mostly innocent) victims.

Animal Welfare believes in the humane treatment of animals in whatever role they have in a relationship with humans, from beloved family pets to livestock. Humans who own animals are to practice caring and responsible stewardship, ensuring a good quality of life, and a merciful end that spares the animal as much physical and emotional distress as possible.

Animal Rights views ANY relationship between animals and humans to be cruel and exploitive. This is not just in regards to animal abusers, animal hoarders, or livestock owners, but their ire is also directed at pet owners who slavishly pamper their pets. Because they view all human possession of animals as torturous, some animal rights groups, such as PETA, purposely acquire animals for the express purpose of culling them to avoid the animal being owned by a human under any circumstances. The kill rate for PETA animals is 90%.

An anonymous Crime Stoppers tip (for which $2,000 was paid; this screams conflict of interest, or malicious intent by the tipster) led the Animal Control Officer to Ms. Bell, a breeder of show and livestock rabbits. The officer, followed by a bevy of TV reporters schooled by the House Rabbit Society, described the horrific conditions on air, including multiple dead rabbits on the premises.

Rabbit breeders in Colorado familiar with the situation describe Ms. Bell as a show rabbit breeder, disease researcher, 4H leader, and supplier of prey animals to a raptor rescue organization. Her rabbits were healthy and in great shape.

While the House Rabbit Society may be well intentioned, their experience and knowledge base is limited to caring for domestic rabbits as spoiled pets. Rabbits that are not pets, such as breeding, show, and livestock animals are outside of their expertise, and so they draw many incorrect conclusions about the required care for rabbits that aren't family pets. In their view, any rabbit in human custody that does not receive the level of pampering as a pet rabbit is being exploited and abused.

The case made no sense, so in the dubious hope that a lack of education was at the heart of the matter, we wrote a letter to the sheriff of Jefferson County in Colorado. The main points of that letter are included below.

According to the news reports, the animal control officer discovered dead rabbits and live rabbits among the 200 rabbits, rabbits without food and water, and cages sitting in piles of manure.

The "shed" which housed this ‘deplorable’ situation was "warm" - 84 degrees, which was significantly cooler than the ambient temperature thanks to running swamp coolers.

The article immediately planted the thought that the owner of the 200 rabbits was a "hoarder." (Maybe if she had 200 house rabbits...)

"We have dealt with hoarding cases before," Jennifer Strickland, the shelter's director of community relations, said. "As far as 200 rabbits, that's something we haven't encountered."

She continued: "The owner may not believe that anything is wrong with the animals. I believe they are harder to care for than people think." 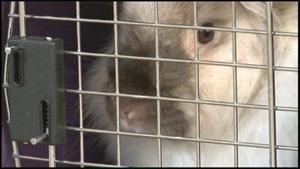 One of Ms. Bell's seized rabbits in a dog crate in 89+ degree temperatures

In the face of absurd lines of reasoning (the breeder knew exactly how to care for her 200 rabbits and was mostly doing a great job of it), I’m trying to convince myself that it was simply a lack of education that led to these trumped-up charges. However, the Coloradans familiar with the breeder, some of whom have been inside her barn and know the woman personally, are describing a railroading (their term).

But okay, let’s go with 'needs-education,' which is why I wrote to the Colorado authorities:

Ms. Bell was eventually found guilty of misdemeanor charges of animal cruelty based on the 'expert' opinions of those who know nothing about livestock rabbit care and who have the stated intention of eliminating "animal exploitation" [read: any animal ownership or uses whatsoever].

In the Wild West, this would have been called a lynching.

It should be evident that animal rights organizations are not experts in livestock rabbit care.

Why would you then consult them in suspected cases of livestock abuse?

Additionally, by definition, animal rights activists (HRS included) reject the term ‘animal welfare,’ having just one goal in mind - to achieve a society where animals are not used at all. No farms, no pet dogs, no pet cats, no zoos. (Welcome to Tofu Town.)

You don’t have to accept my word for it. This once-hidden agenda is now a very open one: Quotes From the Leaders of the Animal Rights Movement.

If they cared about the welfare of those 200 rabbits, we'd be calling them Animal Welfarists, and I'd be one of them.

Here’s the irony, and tragedy, of this alleged animal abuse case:

This breeder’s 200 rabbits were subsequently mishandled by the "animal rescuers," whose main area of expertise was caring for spayed and neutered house pets:

Of course. Using cruelty charges for publicity, whether true or false, is a common method used to fund a non-profit shelter/rescue organization. God knows they can't rely on any handouts from the Humane Society of the US (HSUS).

It is not that animal cruelty never occurs. We know that it does. But in the case of Ms. Bell and her 200 rabbits, there were no legitimate cruelty issues.

It would have been far wiser, less expensive and a whole lot more logical for the County to have left the animals in place with the demand that appropriate measures be taken to ensure that all the cages get cleaned. Having an animal control officer drop by once or twice to verify compliance would have been far less stressful to the animals, less costly to the County, and would have eliminated the flagrant miscarriage of justice in the case of this rabbit breeder's 200 rabbits.

Next time, esteemed practitioners of Jurisprudence and concerned citizens:

Consult the HRS or Shelter organizations only if the rabbits in question are
house rabbits.

Click below to see posts to this page from other visitors...

Ms. Bell has been raising rabbits longer then most HRS members have been alive. Rabbits were domesticated for HUMAN FOOD animals not pets, and are close …

Years of work down the drain

Not only were her rights violated, but years of selective breeding have been destroyed. Any rabbit breeder knows how difficult it is to develop an excellent …

This woman is obviously guilty.... And...SNIP! Karen here, saying, Sorry, Haylei. As you can see, I've deleted most of your post. It was just …

What the h*** are you talking about?

Was watching the 7-news of whole thing, and in the background you can see the Sheriff's department carrying dead rabbits and eventually putting them in …

While this has enraged the Show Rabbit Community, what worries me even more is the violation of this woman's rights as a citizen of the United States. …

Reader Opinion about 200 Rabbit Theft Not rated yet
Sad to see that the breeder's rabbits were confiscated in this manner. Experienced rabbit custodians are very well aware that when rabbits are maintained …

Where you there? Not rated yet
How can you say anything if you didn't see the barn and the rabbits inside. Yes there were dead rabbits. 25 in all. That's my entire herd. Did any of you …

(The ability to post your thoughts to this page has been suspended, however you can still comment on any of the posts here.)