Dutch Rabbit. Get the history, description, standards, photos of these distinctively parti-colored rabbits. Is this breed of rabbit right for you?

History of the Dutch Rabbit

The UK is actually the country in which the Dutch breed was established and standardized, though the actual bloodlines are from the Netherlands. British rabbit breeders of the early 1800’s obtained recently arrived Brabancons at the London ports and added them to their breeding programs.

The breed in England was called the Dutch breed as early as 1835.

The earliest engraving of the Dutch breed reveals a nearly entirely colored rabbit which possessed two white front paws and a narrow collar covering little more than the animal’s dewlap region. It did not even have a blaze, though many Dutch animals did, as did the Brabancon from which the Dutch was developed. 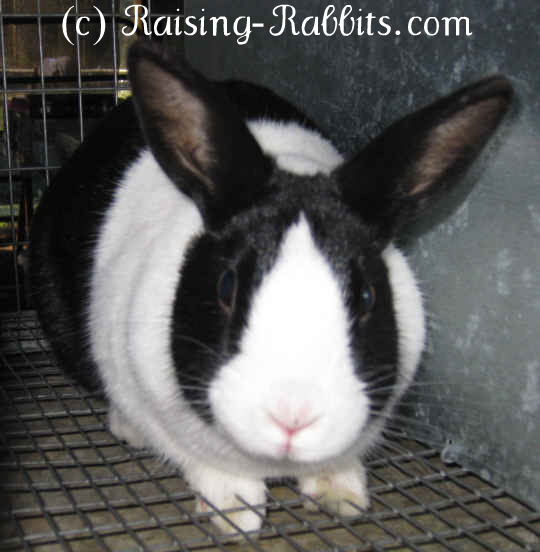 At the time, they weighed up to 9 pounds, and were cobby and muscular in type. The does were prolific, and could be counted on to mother their litters well.

Fanciers of the developing Dutch breed continued to line-breed and in-breed the Dutch. In-breeding significantly reduced the size of the breed from 9 pounds down to as little as 1.25 pounds in a few animals.

Controversy over the direction of the breed prompted calls for the creation of a Dutch Rabbit Club, which was established in December, 1884. The Dutch markings and type were then standardized in England by the late 1880’s.

Today’s familiar Dutch breed has remained unchanged since then.

Dutch breed rabbits arrived in the USA at the beginning of the 1900’s, and was one of the first breeds accepted at the formation of the National Pet Stock Association, forerunner to the ARBA, in 1910.

In the USA: Dutch are a small rabbit breed weighing up to 5.5 pounds. They are compact and cobby in type, and recognized in 7 varieties: Black, blue, chinchilla, chocolate, gray, steel, tortoiseshell 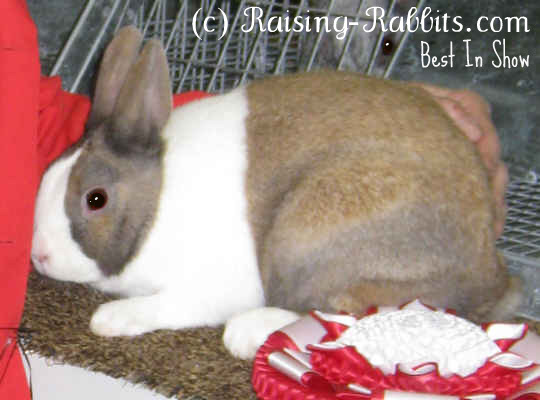 This show-stopping tort Dutch rabbit is a Best In Show winner.

The American Dutch Rabbit Club provides descriptions of and faults associated with Dutch markings. The specifics can also be found in detail in the ARBA Standard of Perfection, complete with pictures of ideal and imperfect markings: