The Belgian Hare - Racehorse of Rabbits. Will this breed of rabbits trigger your fancy and fit into your life?

A tame breed of domestic rabbits called Leporines began to rise in popularity in Belgium around 1850. These rabbits had the wild-rabbit agouti coloring and looked quite a bit like the local wild hares.  Some breeders actually tried to pass them off as a cross between rabbits and wild hares. 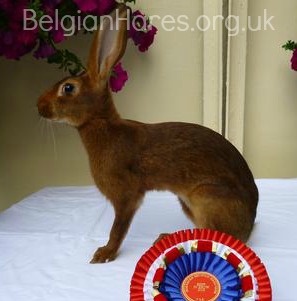 We think a lot of folks believed the rumor back then! The London Zoological Gardens imported some Leporines in 1856. They put them on display...and ran a few scientific tests of their own. Their scientists eventually debunked the idea as 'impossible.'

Despite the science, the new breed began to be called the 'Belgian Hare' around 1860.

Pictured: Reserve Champion of the Belgian Hares UK stud (West Yorkshire). This is an excellent example of the breed on both sides of the pond today.  Used with permission.

Then, in 1873, Mr. Winter "William" Lumb, the godfather of the breed, discovered the Hare from Belgium and his life's calling. In 1873, he and his brother-in-law, Mr. Ben Greaves, imported 12 Belgians into Britain, and followed that up with the import of an outstanding buck. For the next 59 years until the day he died, Mr. Lumb bred and kept Belgians, and guided their development into their present form.

He must have been intrigued by the ‘hare-rabbit’ rumors. For years Mr. Lumb tried, in his words, "in every conceivable manner," to inter-breed wild hares with these new domestic 'hares,' including hand-rearing the wild hares for tameness - to no avail.  Today it is clear that Belgians really are nothing more than domestic rabbits that were selectively bred for traits and body type resembling those of the European wild hare.

Back in the day, nearly every litter gave the breeder off-colored rabbits amidst the typical reddish-hued bunnies - solid blacks, pure reds, and even fawns. Additionally, Leporines - now Belgians - were heavy, squatty, and carried heavy bones. They frequently had disqualifications such as white toenails, feet and white stars on the forehead. Yet it remained Lumb's passion to create a fine-boned, well-arched, racy rabbit that indeed closely resembled the English wild hares.

The first breed standard (1875), written in Britain, described the "properties of the Belgian Hare."

Under Forelegs and feet:

Interest in these unusual rabbits slowly mounted. The first club of Belgian Hare breeders was founded in 1880 by Mr. Lumb and 20 other breeders.

Growing pains typically accompany the development of any new breed. For Belgians, the greatest controversy was color and ticking, and it swirled through England from 1882 through 1888.

In an effort to settle the matter, a Mr. J.H. Roberts articulated the many interpretations of color in an article published in The Rabbit Keeper (forerunner of the UK's Fur and Feather), and then suggested some changes to the standard:

Apparently his was not an isolated opinion. The article became the catalyst for resolution. Mr. Lumb redrafted the standards of excellence including Mr. Roberts' recommendations. He maintained his vision of a rabbit that looked in shape like the English wild hare (even if the color no longer matched). The new, and much clarified, standard was overwhelmingly accepted.

Suddenly, everyone knew exactly what a Belgian should look like, and they liked what they saw.  With the air cleared, even more breeders jumped on the Belgian bandwagon.

Belgian Hares in the USA

Mr E.M. Hughes of Albany NY was the first to import Belgians to American soil (1888), and he was not the last. Belgians began to trickle, and then pour into America, picking up steam during the last five years of the 19th century. In 1897, the National Belgian Hare Club Of America was formed.

By 1898 the Belgian Hare Boom was in full swing!

Between 1898 and 1901 thousands upon thousands of Belgian Hare imports flooded into the USA. They became a very hot commodity. There were 60,000 Belgians in Los Angeles alone at the turn of the century, bred and imported. The record price for a single Belgian was $5,000, paid during this time frame.

The market eventually saturated, and prices plummeted to $25 apiece for excellent stock. This, combined with the development of several new American domestic rabbits, the American and the New Zealand, spelled the end of the big numbers of Belgians.

By 1925, the numbers of Belgians were already in serious decline. Yes, people were using them for meat, but clearly, when a rabbit bred specifically for meat qualities is placed next to a Belgian, it is clear which animal carries the most meat on its bones, and many breeders jumped ship in favor of these new breeds.

Today the breed is considered threatened, according to the American Livestock Breed Conservancy. Nevertheless, a band of dedicated breeders continues to breed Belgians in continued pursuit of perfection.

The Belg. Hare is a very striking animal with an amazing and intense mahogany-rufus-red coat under the wavy black tipping. There are other racy breeds, but none come even close to the coiled-spring, sleek and slender raciness of the Belgian.

Belgian Hares are recognized in the USA, UK and across Europe. With the decline of numbers, the American national club folded, but in 1972, the American Belgian Hare Club was re-formed, and is active today.

The USA standard calls for a maximum weight of 9 1/2 pounds.

In the USA, the rich rufus red coloration is the only variety recognized.

The BRC, however, now recognizes both Black and Tan (called the Tan Hare), and Black Hares.  A White variety is currently under development in the UK as well.

Info on other rabbit breeds start at Rabbit Breed Descriptions

I have 9 Belgian Hares..

Once I saw just one picture of the Belgian Hare I was sold...completely in love. Now I am a hobby breeder of black-tan Belgian Hares here in the Netherlands. …

Beautiful Belgian Hares Not rated yet
I own and have bred 2 litters so far of Belgian hares. I have a mum who is Rufus red, dad to second litter who is albino and 2 babies, 1 from each litter …

Belgianhares.org.uk Breeder of Exhibition Hares Not rated yet
My family kept Belgian Hares and English rabbits after the Second World War. I inherited my fathers interest and was showing my own rabbits by 10yrs old. …