The very first national rabbit breeder's club, The National Pet Stock Association (forerunner of the ARBA) was just a baby - 8 years old - when the American Rabbit was recognized as a breed in 1918.

Mr. Lewis H. Salisbury was the inventor, and his secret genetic recipe died with him, though some breeders have guessed that Blue Flemish Giants, Blue Viennas (now extinct), Blue Beveren, and Blue Imperials (now extinct) went into the concoction.

When the ‘perfect specimen’ was finally obtained, Mr. Salisbury named it "Pasadena Major," and then built the standard of perfection to match all the qualities of this 'perfect' American specimen. 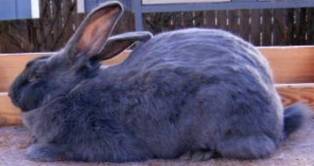 Every once in a while, breeders found a white bunny amidst the sea of blue in the nest boxes. Seemed like a waste to just throw these away. So they began developing a White American, tossing in a bit of Red-Eyed White Flemish Giant. In 1925, White Americans were measuring up to their Blue siblings and were recognized as a second variety of American.

The advent of New Zealand Whites and Californians nearly spelled the doom of the American.

Breeders flocked to these new, bulky breeds and lost interest in Americans. Today NZWs and Californians are the mainstay of commercial rabbit production, while Americans stand near the brink of extinction but for a few dedicated breeders. In 2006, Americans were the rarest breed in America. The American Livestock Breeds Conservancy listed them as Critically Endangered.

Then in September of 2006, providentially perhaps, a herd of 38 ‘New Zealand White Rabbits’ was advertised for sale outside of Edmonton Alberta, Canada. Turns out that a Christian community of Hutterites had been raising this herd of rabbits for meat ever since the 1920s. They looked exactly like Americans, despite the NZW label. 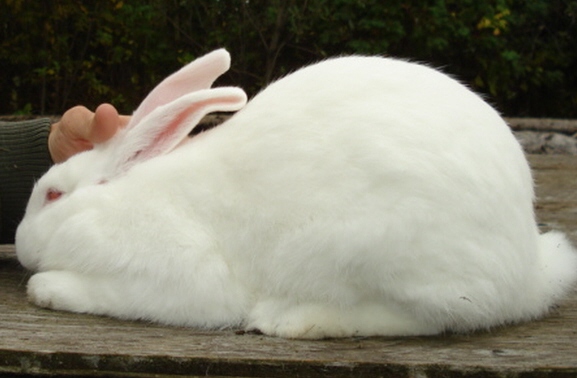 A Hutterite-raised rabbit. This is no NZW.

Ms. Gayle Gordon and Ms. Helga Vierich-Drever, both of Edmonton, purchased the entire colony, and are successfully showing, breeding and registering the rabbits as Americans.

In 2010, Americans, both Blue and White, were listed as critically endangered.

Since 2012, the American breed appears to be rebounding somewhat, as breeders rediscover the breed traits that made them popular in the early days - hardy, docile rabbits that kindle large litters and carry strong maternal instincts and milking ability. The American Livestock Breeds Conservancy still lists the breed as "threatened."

Americans are a meat rabbit with a mandolin body type.

The Standard of Perfection can be obtained from the ARBA or the Breeders of the American Rabbit (BAR).

Blue – a rich, clear, dark uniform slate blue, as deep as possible, uniformly covering the entire body. Blues are reputed to have the darkest blue of any domestic rabbit breed.

Red-Eyed American Rabbit Not rated yet
When we were kids a cat attacked a bunny so my Dad brought her in and we gave her medical care, took her to the vet, however the shock of the attack killed …

My American Blue Doe Not rated yet
I had actually bought my blue doe in a pet store with my boyfriend. We were looking around in a tub of rabbits and I saw this amazing blue colored …