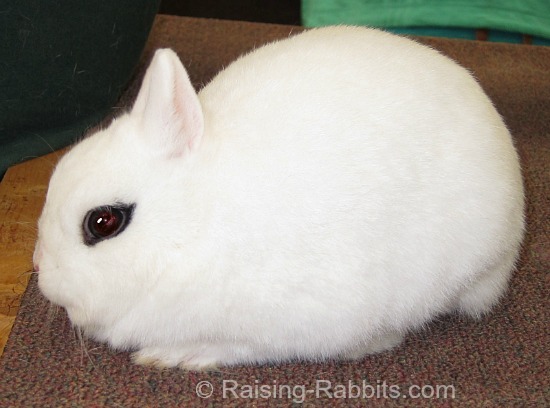 Dwarf Hotot: The specifics of this rabbit breed in the USA and in Europe, including history, description, standards, and photos.

This rabbit breed is a very small, stocky, all-white rabbit with an eighth-inch band of black around the eyes. Its personality is characterized as docile.

While it clearly resembles a Netherland Dwarf, it is permitted an additional half-pound for a maximum weight of 3 pounds. Ears should be no longer than 2.75” long in order to remain balanced with the rest of the rabbit’s body.

History of the Dwarf-Hotot Rabbit Breed

In the 1970s, during the years that the Iron Curtain divided East and West Germany, breeders on both sides of the Wall independently embarked on missions to create tiny versions of the Blanc de Hotot Rabbit.

In East Germany, a breeder started with a Blanc de Hotot buck and miniaturized the offspring by mating it with a red-eyed white Netherland Dwarf. Repeated crossings back to Netherland Dwarfs resulted in healthy, hardy Hotot Dwarfs, but which were much larger than the typical Netherland Dwarf.

In West Germany, the project started with the crossing of a black Netherland Dwarf with a red-eyed-white Netherland Dwarf. This particular cross resulted in quasi-Dutch markings in the offspring. One of these offspring, a female, when bred back to its sire, yielded a tiny Dwarf with dark eye bands, but also color on the ears and back.

Joined by other breeders, they eventually achieved their goal – a Blanc de Hotot-marked rabbit in a true Dwarf size. They achieved the tiny size, however the rabbits lacked vigor and had reproductive problems.

The project somehow became known to breeders on both sides of the Wall. In 1979, sets of animals traded sides. The blending of the blood lines worked wonders for the breed, improving and standardizing the size and the vigor of the rabbits.

Dwarf Hotot in the USA

Seven little Hotots purchased in West Germany were imported into the USA in 1980 by Ms. Elizabeth Forstinger. She later imported more little Hotots from both West and East Germany, which she bred wisely, selecting only the best of the best.

The process for acceptance in the ARBA began in 1981, and was completed successfully in 1983. The American Dwarf Hotot Rabbit Club was also chartered by the ARBA in 1983, and is the national online presence for Dwarf-Hotot rabbit breeders throughout the USA.

This breed is not recognized by the UK’s British Rabbit Council (BRC). 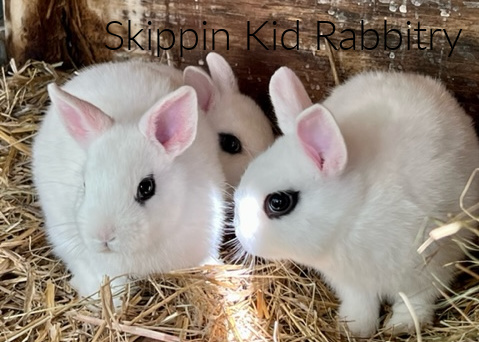