The Blanc de Hotot Rabbit is a French rabbit breed named after the area in which they were developed (Hotot-en-Auge). You might consider this large white rabbit with the mascara around the eyes as a pet or for meat or show.

A French woman named Madam Eugenie Bernhard is given sole credit for creating the Blanc de Hotot, starting in 1902.

She took the Geant Papillon (similar to Checkered Giant), and slowly, through selecting animals with the fewest markings from each litter, she bred animals with fewer and fewer markings. The flank spots disappeared, and then the spine markings and the color on the ears.

It was a long, hard road. After more than 500 matings and about 18 years, Madam Bernhard was finally satisfied enough to start showing her "Geant (Giant) Blanc de Hotot, as she called them on her entry forms.

Her rabbits bred true -- dark eyes, and an all-white coat, although many rabbits still had the remnants of color around the eyes - dark eyelashes and the hint of smutty gray on the lower eyelids.

The two World Wars took a toll on the numbers of Hotots, as they did with every other breed. In France, they all but disappeared. But Hotots found a large following of breeders in the Bernese region of Switzerland in 1927. The Swiss liked the black eyelashes and narrow remnants of black around the eyes of their Hotots. It is thanks to these Swiss breeders that our Hotot rabbits have those bands of "black mascara," despite all of Madam Bernhard's hard work to eradicate them. 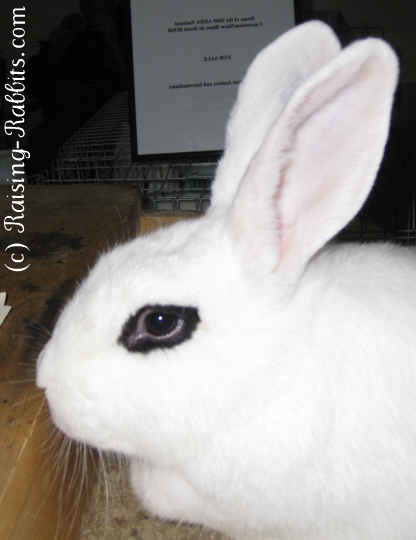 The process that Mr. Hamaker used was identical to that of Madam Bernhard. Without a doubt, Mr. Hamaker appreciated those black bands, as did the Swiss, for our Hotot breed today still has them.

The ARBA accepted the Blanc de Hotot as a recognized breed in 1978.

Today, the American Livestock Breeds Conservancy lists the Hotot breed as "threatened," however not yet critically endangered.

Blanc de Hotots are a solid frosty white with brown eyes. The only color should be narrow eyebands lining the entire eye. By 'narrow,' the ARBA Standard of Perfection specifies 1/16 to 1/8 inch. Both eyelids and eyelashes are black. Any break in the black banding is a disqualification. Eye circles that are too wide (more than 3/8 inch) is also a disqualification.

Body type is muscular, rounded and well-filled. Bucks weigh up to 10 pounds, and does up to 11 pounds.

The Hotot's fine guard hairs are abundant and visible, creating a frosty sheen that is characteristic of Hotots.