Beverens originated, unsurprisingly, in Beveren, Belgium, around the year 1898. The breeds used, according to the national Beveren club's website, were the Brabancon, St. Nicolas Blue (interesting, since Beverens were supposedly used to create St Nicolas Blues), and the Blue Vienna. The first breed standard was drafted in 1902 using the name, "Blue Rabbit of Beveren," and they were first shown in England in 1905 under the same name.

Beverens were blue, but very little was truly standardized about the breed in the first years of the 1900s. Beverens could be found in many shades of "blue," as well as in many sizes, from medium to large. Because no consensus as to size was ever reached, Beveren rabbits eventually ended up as two breeds - the regular Beveren, and the Giant Beveren.

As to color, the furriers of the day preferred the medium to light blue coats that had a light lavender hue.

Since the history of Beverens is intertwined with the history of the St Nicholas Blue rabbit, we’ll hop over to Sint Niklaas, which is just down the muddy road from Beveren. 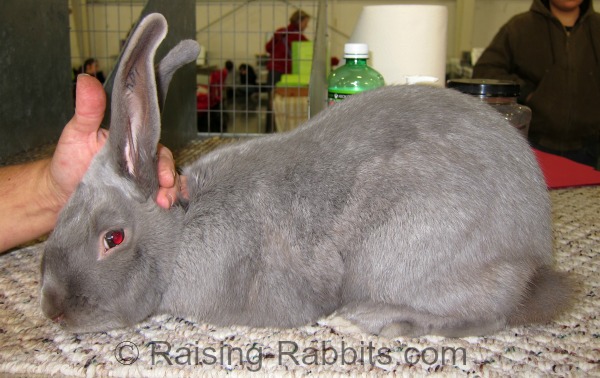 A beveren show rabbit with excellent blue coloration for the breed

1899 is the year St. Nicholas breeders give as the beginning of their breed of rabbits. Beverens factored significantly in their breeding programs, with Flemish Giants and perhaps others of the local breeds. Breeders in St. Niklaas were finding marked, blue and white rabbits amongst the kits in their nestboxes. They tended to have face blazes, perhaps a white necklace, and various spots and white feet.  None of this was surprising to anyone.

There were at least two local Belgian breeds with such markings. The Wachtebeke (now extinct) hailed from Wachtebeke, a Belgian town not far from Sint Niklaas. The Wachtebeke rabbit had a blaze, white feet and a thin white collar extending from the chin and chest to ring the neck like a one-centimeter (less than a half-inch) thin necklace of white.

The Brabancon was a highly esteemed meat rabbit raised extensively in the Brabant region of Belgium. It had similar markings, however the white necklace was a lot wider.

It is unclear whether or not the early Beveren breeders in Beveren actually favored solid rabbits over marked ones.

But the St. Niklaas breeders certainly included both in their breeding programs. Rabbits under the name of St. Nicholas Blues began hitting the Belgian show tables in 1906, which is when a controversy began to flare up over the names of these two exceedingly similar breeds.

We can just hear some of the "discussions:"

"You can’t call those St. Niklaas rabbits - they're exactly like Beverens, and besides, you live too close."

It was a tense time. The Sint Niklaas rabbit breeders even suggested doing away with the Beveren name altogether. The ‘suggestion’ of a new name didn't go over well with the folks in Beveren who really did own the claim to initiating the breed. For a few years, confusion reigned about which name to use, but finally it was agreed that the blue and white rabbits would be called by the name of Sint Niklaas Blues (the anglicized name is St. Nicholas Blues), and the solid blue rabbits would retain the name of Beveren.

Whew, glad that got resolved!

Beveren Rabbits quickly made their way to France, where they became hopelessly interbred with the Vienna Blue breed.

In the end, St. Nicholas rabbits didn’t even keep their main distinction - the face blazes.

In 1917, curiously, the Belgian Standards Commission decided to eliminate the spots, stops and blaze from the St. Nicholas Blue. Today, selective breeding has given the St. Nicholas a solid, very light sky blue-grey color -- the lightest blue shade of all blue rabbits and rabbit breeds. It is large, weighing up to 6 kg (13.2 lb).

St. Nicholas Blue Rabbits are on the brink of extinction, however a very few breeders in Belgium continue to breed them.

Beverens have a pronounced mandolin body type, are hardy and docile, having usually good mothering instincts. Kits have a moderately good grow-out rate (but not beating NZWs). With fur length being between 1 and 1 1/2 inches long, the Beveren is an excellent dual-purpose rabbit, useful for both meat and fur.

Beverens were initially blue only; today the British Rabbit Council (BRC) recognizes 5 'self' colors: blue ("a clear shade of light lavender blue"), blue-eyed-white, black, brown and lilac. In the UK, their weight is to exceed 3.62 kg (8 lb) with no upward limit mentioned. 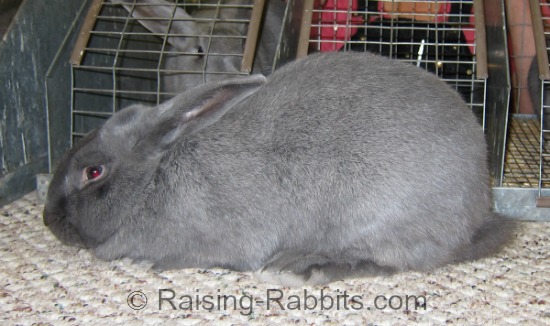 They are an endangered breed in the USA; a number of breeders and homesteaders raise Beverens for meat and to preserve the breed.

The American Livestock Breeds Conservancy places Beveren Rabbits on the "Watch" list, the least threatened of its three lists. (The other two are 'endangered' and 'critical.')

Beveren rabbits are fine meat rabbits. But no matter where they are raised, from the USA, UK, Europe or other, they seem to suffer from a lack of popularity. Perhaps they’re just too, umm, ordinary. (But if you ask me, white with blue eyes is very cool!)

What about the Giant Beverens?

They were recognized in the USA in 1920, by the organization that would become the ARBA. The weight was required to exceed just 7 lb. Giant Beverens lasted only briefly, and then went extinct.