Giant Angora Rabbits:
Description, grooming and care. Are you interested in raising Giant Angoras for their large quantities of warm, lightweight wool? Plus, learn about shearing the Giant Angora.

The Angora Rabbit has been domesticated for its wool for over 2000 years.

See Angora Rabbits for the history of the angora rabbit, as best as can be determined.

The Giant Angora is the result of attempts to gain ARBA recognition for the German Angora Rabbit.

Because it was thought that German Angoras were too similar to English angoras, breeders used the German Angora rabbit and added size and a commercial body type. To do this, they included genes from the French Lop and the Flemish Giant. The result was the Giant Angora, accepted for recognition by the ARBA in 1988.

Giant Angora Rabbits are also endangered as a breed, according to the Rabbit Geek. In 2006, they ranked #2 on the Rare Breeds List, the second-rarest rabbit breed, after the American Rabbit.  (The Rare List is due for an update.) Other angora breeds may more closely meet the particular needs of many angora rabbit breeders and spinners.

Feed Supplement for your angora rabbits
(but great for all breeds) 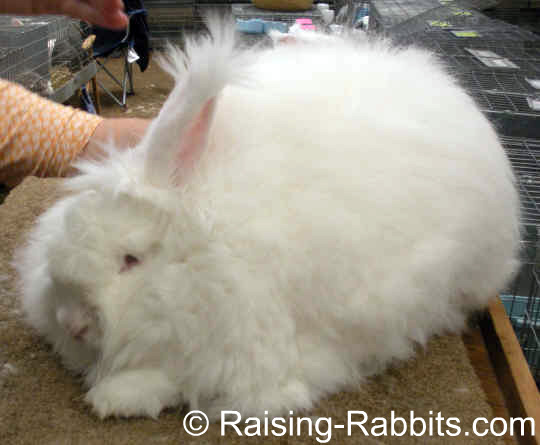 Bred on the German Angora, the Giant Angora has a similar balance of the 3 types of fiber in its wool:

Giant Angora Rabbits do have head furnishings. These will be heavier in bucks usually, but not so extravagant as is seen in the English Angora rabbit.

Of the 4 angora breeds recognized by the ARBA (English, French, Satin, Giant), the Giant Angora produces the most wool.

German angoras don’t molt, however the Giant Angora goes through a sort of partial molt, and needs its wool harvested every 3 months. Some of the wool can be plucked, but you’ll need to cut or shear at least some of the coat.

Care of the Giant Angora's wool coat is not as difficult as the care needed by the English Angora rabbit. However, angoras are susceptible to starvation by wool block, and are more sensitive to temperature changes due to their incredibly thick coats (or during the 1 - 1.5 months immediately following a shearing).

They require additional care specific to angoras. Here is another excellent resource that can help:

Go to Joy of Handspinning for more information on spinning angora and other wools.

Consider becoming a member of the American Rabbit Breeders Association

Have your say about what you just read! Leave me a comment in the box below.
Follow @@RaiseRabbits
raisingrabbits

*Affiliate Links:
We use affiliate links (including Amazon.com links) to help keep the use of this website completely free of charge to you. We have selected our affiliate products carefully with the purpose of improving your experience, both on the Raising-Rabbits website, and in the ease of the care you provide your rabbits. Purchases from our affiliates come at no extra cost to you.