Perhaps surprisingly, New Zealand Rabbits are the very first truly American breed of rabbits. Their genesis is tied much more to Belgian Hares than it is to rabbits from New Zealand.

Since New Zealands are as American as sliced bread, why are they called ‘New Zealand Rabbits?’

A printed article about New Zealand Red Rabbits circulated in 1918 about rabbits imported from New Zealand to California. The article connected them to the newly developing breed of rabbits known as New Zealands.

While the alleged imports may or may not have contributed to the breed that would bear their name, the establishment of the New Zealand Rabbit is now understood to be a completely American story, since the breed arose in multiple locations concurrently across the USA, with or without any New Zealand imports.

The fact that one was a buck and three were does must have looked to the breeder, Mr. William Preshaw, like a gold-embossed invitation for the development of a new variety - White New Zealands. 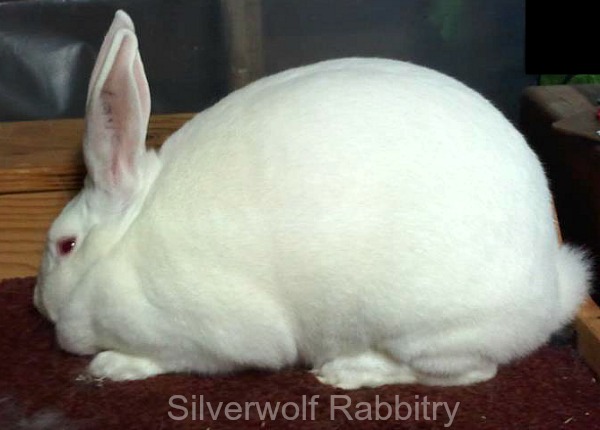 The rabbits bore only slight resemblance to the New Zealand White Rabbits of the Twenty-First Century. In 1920, New Zealand Whites were stocky and white, but they tended to pose in a modified arch much like their progenitors, the Belgian hares.

It is our understanding that Blue New Zealands are being developed through a Certificate of Development from the ARBA.

Today, New Zealand Rabbits have been bred nearly to perfection. They give other breeds very stiff competition for the coveted Best In Show award. 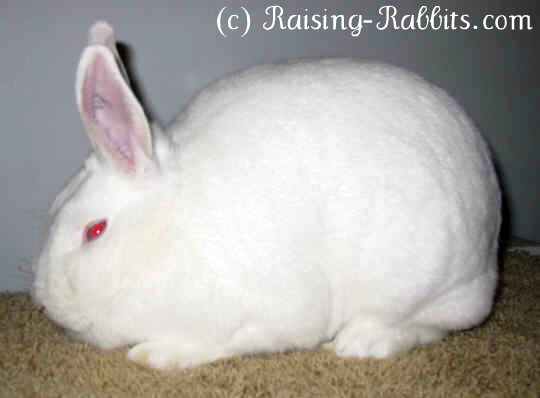 New Zealands have enjoyed rising popularity since the mid 1920’s. That’s a lot of years of breeding, line-breeding and at times, in-breeding.

have been carefully maximized and built in to many commercial herds. Some commercial operations look for the addition of hybrid vigor by crossing their NZW’s with a second breed, or even a third, utilizing Californians, or Altex, a new breed designed to be a terminal cross within a commercial herd. (Altex are not recognized by the ARBA.)

Over the years, some recessive disorders have arisen in New Zealands. See Autosomal Recessive Disorders to learn more.

On the other hand, the same frequency of breeding can lend itself to test-breeding and eliminating the same recessive disorders that may have been uncovered. Nevertheless, if you’re thinking of raising meat rabbits or starting a commercial rabbit herd, you may wish to ask questions about any recessive disorders in the rabbits you’re considering for purchase.

Other than ensuring genetically excellent foundation stock, you can hardly go wrong in choosing New Zealand Rabbits as a meat rabbit or as a show breed.

We started raising New Zealand Reds this year. The breeders we got our beginning stock from recently had a litter with fawns in the mix. We now have …

Why I raise New Zealand Rabbits

I have focused on raising New Zealand rabbits for several reasons. First was the does' disposition - they are easily tamed and are excellent mothers, …

Two years ago, I bought a New Zealand Red baby from a local 4H girl. I had heard that rabbit manure was great for vegetable gardens, so I starting looking …

I have a mini rex named Appolo. He is about six months old. I went to the Arba and know all the info. I was wondering about the tattoo thing. Is there …

Had a NZ White male when I was 3 years old!!

I have been raising N.Z. for 12 years with lots of success.

Hugo, My Best Rabbit Friend Not rated yet
Well I've always wanted a pet rabbit, I've always always loved rabbits. I went to a local feed shop as they usually around spring and summer have local …

New Zealand Whites for 4H Not rated yet
My son joined 4H 3 years ago and has been showing rabbits all three years. Two years ago I took him to a Rabbit breeder who raised Californians and New …

Red Rabbit travel easy Not rated yet
This morning I bought two red rabbits at the coast and took them 400 km to the great Karoo. I cooled them down with a water fan and they enjoyed the trip …

Now I know such kinds of rabbits exist... Not rated yet
A couple of years ago, before my 34th anniversary, I got a little white New Zealand rabbit as a present. It was love at first sight for me. However, back …

Black, White and Broken New Zealands Not rated yet
Raising rabbits is a very rewarding hobby, and raising New Zealand rabbits has been a dream come true for most of my life. New Zealands are truly a rabbit …

They are so lovely! Not rated yet
I have had my New Zealand Red for nearly ten years now, I bought her just thinking she was the cutest of the bunch in the pet shop - I was only young at …