Autosomal recessive disorders can lurk undetected for generations behind dominant genetic traits. Blow the cover off your rabbit's hidden genetic traits and eliminate undesired genes in your rabbits by test breeding.

How are autosomal recessive genetic traits inherited? First, some definitions:

Chromosomes are strings of DNA.  Every time a cell reproduces, it creates identical DNA strings for the new cell. If anything goes wrong with that duplication process, you may end up with a mutant chromosome, especially if the mistake occurs in a sperm or egg cell.

The vast majority of mutations are fatal.  You’ll never know they happened because the fetus dies or is reabsorbed by the womb.  But occasionally, a mutation may happen that affects the rabbit’s quality of life but doesn’t kill it.  And very rarely, a mutation may actually enhance the desirability of the rabbit.

The short, plush, rex coat definitely enhances rabbitdom! It is a useful and attractive genetic trait inherited through a single-gene recessive mutation.

On the other hand, Hypotrichosis is a good example of harmful autosomal recessive disorders. It is a single-gene recessive mutation that nearly eliminates the growth of any fur at all. Rabbits with this mutation would die in a hurry in the wild, as the resulting few thin tufts of hair could not protect it from wintry weather.

Recessive means the animal has to inherit a defective gene from both parents. Both parents could be functioning completely normally when each parent carries a normal healthy gene that masks and compensates for a defective copy of the gene.

If you were to mate together an apparently normal sire and dam which each carry the same recessive (masked) defect, their normal and defective genes would pair randomly.  Let's take a look at a Punnett Square illustrating the probabilities of this random pairing.

This Punnett Square helps to visualize the probabilities of inheritance in the offspring of a particular breeding. See Rabbit Genetics for an explanation on how the Punnett Square works.

In this case "N" stands for a Normal gene, and "n" stands for a defective, or autosomal recessive, gene. In this example, the breeder will discover three "normal" babies and one defective one.

Three "normal" babies, you say? All three do appear completely normal, as did their parents. And that is the tricky thing with autosomal recessive disorders. In reality, only ONE baby was completely normal - Baby #1. Fifty percent of the litter (Babies #2 and #3) are carrying that sneaky recessive gene.

How is the breeder to know which baby is which, when they all look normal?

Because autosomal recessive disorders are recessive, they can be masked by a normal gene and passed on asymptomatically for many generations, before beginning to crop up here and there. Depending on the disorder in question, the problem can cause losses in a commercial herd and result in deep disappointments in a show rabbitry.

The best way to root out autosomal recessive disorders is to conduct test breedings. 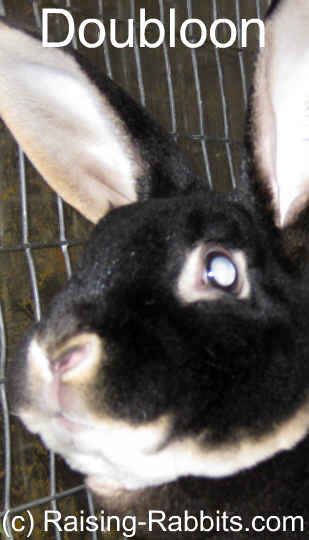 In the Aurora Rex Rabbit Ranch, we were unpleasantly surprised when a couple of our promising juniors got cataracts.  Doubloon was one of them. He had full blown bilateral cataracts at age 4 months. Today Doubloon is blind as a bat, because he inherited two defective genes, one from his sire, and one from his dam.

Initially we wondered if this was the result of some underlying infection that we were unaware of.  A little more research led us to studies done in New Zealand Red rabbits that defined the problem as an autosomal recessive disorder.

sherHere’s what we have done since discovering the autosomal recessive disorder in our herd: 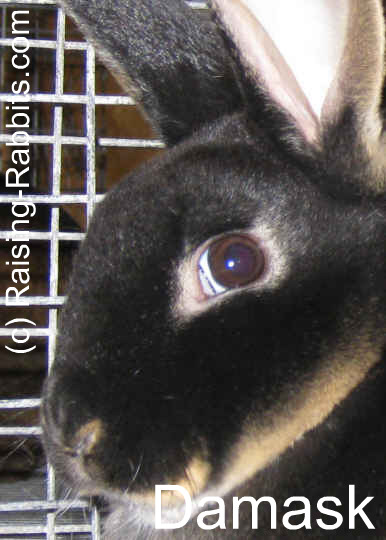 You can see that the lens of her eye is perfectly clear. You can even see - almost - the back of her retina.

Was she normal?  Or, was she a carrier of the cataract defect?  We had no idea by looking at her.  Since she had won three grand champion legs, we felt she was a worthy candidate for test-breeding. The fact that she is cataract-free means she has at least one copy of a normal gene. But what about the other half of the gene pair?? We had to know before putting her into our breeding program.

We did a test breeding with Doubloon as the test buck. By using a buck with 2 defective genes (an animal showing the defect), we felt confident that a single breeding giving 8 offspring would be enough to resolve Damask's status.

Here is their Punnett Square.  You can see that every baby in the nest box will carry at least one defective gene causing autosomal recessive disorders.  Babies 1 and 3 will be asymptomatic cataract carriers. But what about Babies 2 and 4??

Damask had a litter of 7 babies.  Our plan was to grow them for 6 months to give the cataracts time to show themselves, if any.

As it turned out, 10 days shy of 3 months old, one of the babies was already showing a growing cataract: 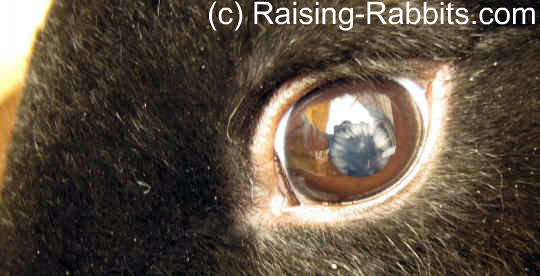 Just ONE positive cataract proves for certain that Damask DOES carry a faulty gene, because in order to get cataracts, the baby has to get a defective gene from BOTH parents. Now, by filling in the Punnett Square’s blanks, we see that one half of the offspring can be expected to come down with cataracts (one more bunny did). 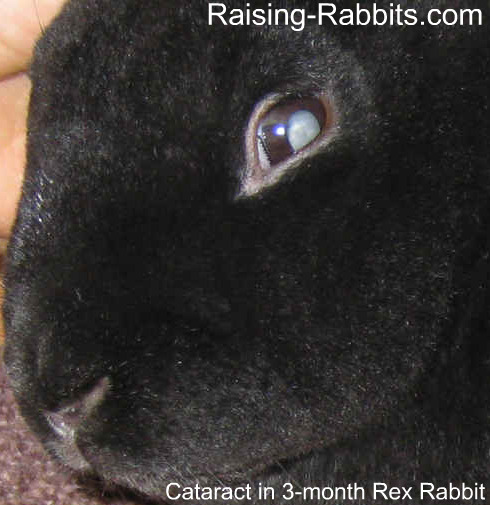 Ten days later at exactly 3 months old, the cataracts in our young black buck were milky white. The youngster was blind already.

If the test animal carries just ONE defective gene, you'll need to repeat the test breeding to improve your chances of an accurate test. You should probably plan for 16 offspring, or 2-3 test-litters. We used a carrier doe to test-breed the bucks. If the first litter revealed no cataracts, we invariably repeated the breeding. We wanted to be SURE that if the cataract gene was there we would find it.

What a pain to do all those test breedings!

But just imagine the major migraines we averted by eliminating the autosomal recessive defect BEFORE it spread throughout the entire herd.

Just for fun, let’s ‘breed’ on paper a
perfectly normal buck with a doe that
carries a defective cataract gene.

All four babies from such a breeding will appear normal. This is how the autosomal recessive defect might sneak along for generations without you ever seeing a single cataract.

But one day, when these babies reach breeding age, two defective genes are bound to pair up.  Then, you’ll ‘get’ to pore over your own records to figure out where the gene could possibly have come from, and make your plans to eradicate the defect from your own herd.

These lists are not exhaustive by any means...

Each of these autosomal recessive traits are inherited in the same fashion as are autosomal recessive disorders, for example, cataracts. And you can test-breed and eradicate an undesirable gene from your herd in the exact same manner as we did in ours, whether it be something as damaging as cataracts and polycystic kidney syndrome, or as innocuous as a light chinchilla gene hiding among your homozygous dark chinchilla agouti rabbits.

Good luck to you, and may all your animals be free of autosomal recessive disorders!

More on dominant and recessive genetic traits at Wiki