Here comes late fall, and it's time to bundle up- just like this newsletter's featured breed, the Lionhead. Their mane almost looks like a scarf around their necks! These fluffy-maned bunnies are the newest breed of rabbit and make amazing family pets.

Aggression: is it a medical issue, or is my rabbit just a bad apple? Learn how to determine what causes aggressive behavior, as well as techniques to control it.

Lastly, an update on the European rabbit crisis in Australia: The population of the invasive species has gone down due to a recent drought. Read more about the current situation in the last section of our newsletter. 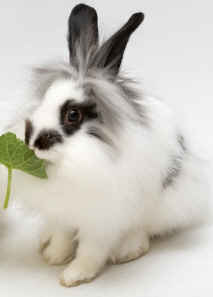 The lionhead rabbit certainly lives up to its name, with a fluffy mane wrapping all the way around its neck. This mane is a result of a dominant mutation found in Belgian rabbits, but is surprisingly not a result from an Angora gene.

A Belgian breeder, Ronny de Clerq, later stabilized the mutation into a breed. He then crossed them with a dwarf breed to make it smaller, resulting in the addition of multiple colors to the gene pool. The breed was introduced to the United States in 1998, but was not recognized as an official breed by ARBA standards until 2014.

We are glad, regardless of how long it took, that this adorable fluff has made it into our homes, hearts, and care. Despite how the name sounds, this rabbit only weighs up to 1.6 kg (3.5 lbs). Because the breed is relatively new, its temperament can vary per breeder, but in most cases they are very gentle, playful, and friendly. Their fluffy appearance and playful nature makes them a great family pet for everyone to enjoy.

Read up on lionhead rabbits at these links: 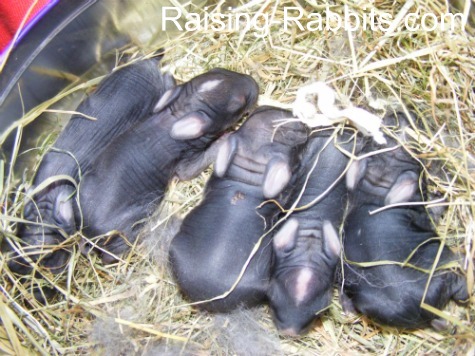 Two Litters in the Space of Five Weeks?!

Q: My rabbit has one 12 day old litter and she had been caring for the babies well. My male is very naughty and sometimes gets out of his hutch. I found him breeding with her again today, though I only saw one breeding. It was the standard - the girl grunts and he tries and humps her, falling off 3 times. If she is pregnant (usually delivers on 33 days) what should I do with her 5 week old babies? I have removed the male from his other hutch and is now in a new inescapable hutch. What do I do?

A: You're probably right in that your doe is pregnant again. I recommend weaning the first litter at four weeks of age by removing the doe from the cage, and leaving the kits in the original cage. Give the doe a fresh nesting box with fresh materials (shavings, straw, and hay), on day 28 of her pregnancy as usual. For more information on weaning and back to back litters, see pg. 145-147 of The Raising Rabbits Problem Solver.

Q: Hi! Is it normal for my bunny not to want to come out? She isn't really "not friends" with me, but she doesn't like to come out. My mom always makes me feel bad but 90% of the time she will hide from me so I can't pick her up and lift her out the cage. She once bit me. And I feel bad because everyone says they need  exercise but she simply doesn't wanna leave. Is it okay that she rarely comes out or should I "force her to come out" every once in a while ?? (By force I don't mean like hurt or in anyway danger her. I don't not want to make her sad/hurt/anything of a sort)

A: Would you classify this rabbit as a pet? Should pets bite their owners? What's the deal if a pet refuses to 'be' a pet?

You're doing fine, Anon, in not "forcing" this rabbit. But I also invite you to analyze the situation.

First: Does the rabbit have a health problem causing it to not want to come out and play? Perhaps a vet check is in order.

Second: How old is this rabbit? If it is unspayed and of breeding age, it might be experiencing a biological drive to reproduce. Would you be interested in providing it a rendezvous with a buck? But this is only a partial solution for cranky does. Another option is to wait it out until October or November, when the drive to breed subsides to nothing. A third option would be to spay the rabbit. This will result in hormone changes that eliminate the capability and the drive to reproduce. This usually improves the doe's moods, as well, though no promises are made to this effect.

Third: NO pet owner should fear getting bitten by their pet rabbit. Your rabbit may be a dominant animal, needing to learn that you are the big bunny in its life. Little bunnies don't bite big bunnies. (In my rabbit barn, the only biters that survive are the pregnant or early lactating does. I give them an allowance for their hormone surges which help them be protective over their offspring. Biters in all other situations land themselves in the stew pot.)

Rabbit Raising Problem Solver pages 44-45 and 159-160 discusses too-dominant rabbits/does, and how to educate your rabbit about your position in your home.

Lastly: Some rabbits are just not cut out to be pets. If at some point you realize that she refuses to be trained, and you’ve explored or rejected all other options, it is your prerogative to remove her from your home (via euthanization) and replace her with a new pet rabbit. I would dissuade you from rehoming a rabbit that cannot be a pet, because the new owner will be saddled with the same problems. Let your vet euthanize it.

DISCLAIMER: In some circles, this is not a politically correct response. Doesn't matter, it is the right thing to do, because it is unkind to dump problems on other people. Yes, people DO take precedence over animals. "Rats are NOT equal to "pigs," which are NOT equal to people."

Rabbits in the News:

Due to a recent, ongoing drought in Queensland Australia, the rabbit reproduction rate in the Queensland area has decreased by 75%.

For many species, this would cause alarm among conservationists for the species’ survival, but for the case of the European rabbit in Australia, this reduction of population is actually a good thing. The rabbit is an invasive species and gnaws away at the vegetation, creating dry, grassless patches of land all over Australia. However, the fight is not over yet. When the rains return to Australia, the rabbit population will have a chance to begin rebounding.

While the rabbits' reproductive rate has decreased in Queensland for now, the Australian authorities should continue to pursue ways to eliminate the feral European rabbits entirely from the countrysides of both Australia and New Zealand.

Your friends at Raising-Rabbits.com wish you a wonderful November 2019, and a Happy Thanksgiving.