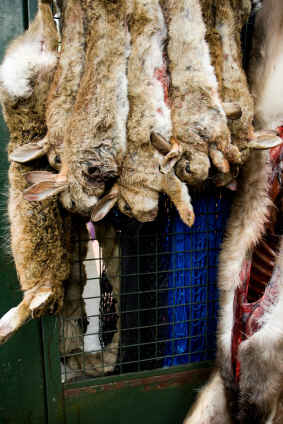 In the opinion of the rabbit butcher at Aurora Rex Rabbit Ranch, there are at least three very humane methods of killing rabbits for dinner.

Any stress during the butchering process can result in the release of adrenaline and other endocrine hormones associated with the animal’s flight response. These hormones negatively affect the flavor of the rabbit meat, and will toughen the meat.

If your farm’s rabbit meat tastes sweet like chicken, that means the rabbit died peacefully and humanely.

Here are three methods of killing rabbits, listed in order of our preference

Killing Rabbits with the Broomstick Method

A broomstick or other straight pole is placed on the rabbit’s neck. The broomstick secures the rabbit’s head on the ground while the rabbit is pulled upward at 90 degrees by its hind legs. The process is very quick and painless, and nearly foolproof.

This is the method of killing that the Bible specifies. Despite this fact, our butcher does not utilize this method, possibly because it doesn’t result in instant death.

Nevertheless, there must be some reason why the Good Book mandates it. Since God declares Himself to be loving in nature ("God is love" 1 John 4:8), and since God frowns on cruelty to animals (Exodus 23:4, 12, Deuteronomy 22:1, Proverbs 12:10, to name a few among many passages), we believe that this method probably results in far less stress to the animals than we would tend to assume.

In South America, we watched Peruvians butcher their cattle by slitting the throat and by puncturing the heart. The animals showed no distress whatsoever. As their blood pressure bottomed out over a period of about one minute, their knees buckled, they sank to the ground, and the lights were out permanently. In their reality, they simply went to sleep.

A sharp blow to the base of the head, done correctly, results in instant death. The blow by itself disarticulates the neck resulting in death.

We consider the Fatal Blow to be very humane, however there is more room for operator error, in our opinion. That’s why we place it at #3.

In a variation of the Fatal Blow, a sharp blow to the top of the head renders the rabbit unconscious. One can then immediately broomstick the rabbit, killing it.

Killing rabbits, removing heads and hanging them to drain takes only a few moments to a minute or so apiece, no matter the method you choose to use.

It is certain that the end of a domestic meat rabbit is nothing like the fate suffered by wild rabbits - running, hiding, dodging, getting caught and then ripped limb from limb while still alive.