The Easter bunny history reads like a fairy tale: Big rabbits that lay colorful eggs only on Easter morning.

But what do bunnies have to do with Easter??  And those colored eggs?

The Easter bunny has roots in medieval German tradition. The stories vary quite a bit, as seen at Wikipedia and in this Time article.

The roots for an Easter rabbit are clouded in history, but no doubt stem from pagan fertility goddesses, as rabbits are known to be extremely fertile.

The jump to eggs may have begun from the German practice of abstaining from eggs during Lent. As a way to preserve the eggs, they would be cooked and dyed.

The myth of an egg-laying rabbit may have arrived in America with German immigrants, who encouraged their kids to be good (a la Santa Claus) by promising colored eggs on Easter. The myth stretched even further when children's Easter baskets became the nests in which the Easter Bunny laid both dyed eggs and chocolate ones.

Read an informative article from Exploregod.com on the Easter bunny and Jesus here. 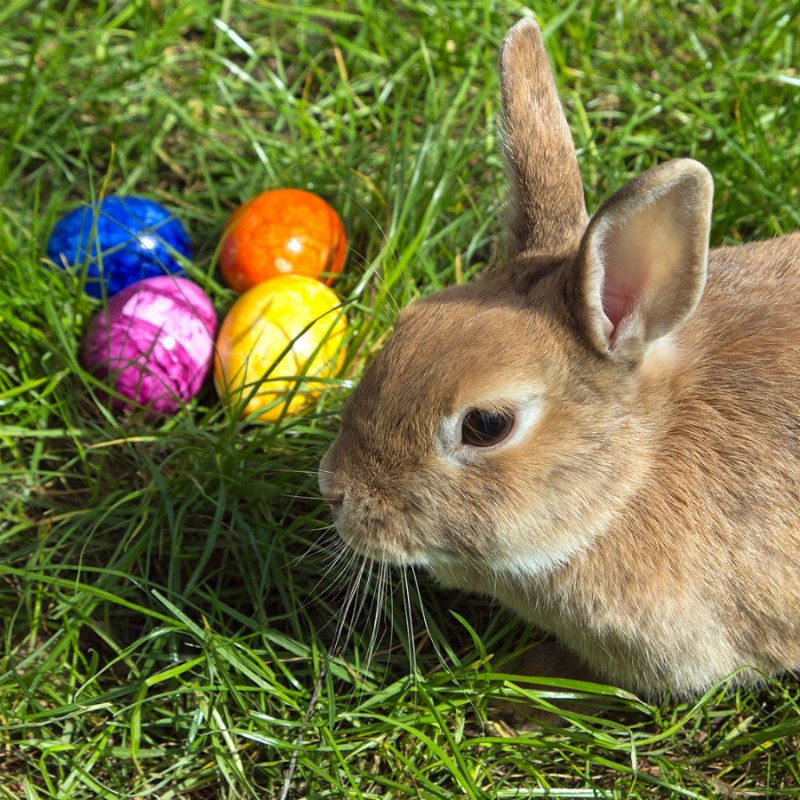 Today is Easter Sunday, a perfect day to retell how things really went down on the very first Easter morning.

Easter is the day Jesus rose from the dead, after getting Himself crucified over His claim that He was God.

(No Easter bunny - history is about Jesus' death and resurrection.)

If you had seen His healings, miracles and kind-heartedness, you might have agreed with that claim, especially if you had heard God’s thundering voice from heaven...

A LOT of people thought maybe He WAS God's Son, just as He claimed, and that must have made the politicians nervous. Especially after Jesus fed 5,000 out of nearly nothing, and the people wanted to make Him King.

(Please note that we are summarizing history, not blaming any particular race. After all, the Lord God Himself said of the Hebrews, "The LORD your God has chosen you ... because the LORD loves you, and because He would keep the oath which He swore to your fathers..." [Deuteronomy 7:6-8]. After you read this page, you'll see that God truly loves all races.)

At any rate, Jesus died after being crucified -- you can read all about it in any of the first four books in the Bible’s New Testament. A Roman soldier stabbed his spear in Jesus' heart but the blood and water had already separated in his veins.  He was dead. A rich guy named Joseph let Jesus’ friends bury Him in Joseph’s own fancy tomb.

(No Easter bunny - history is about Jesus spending 3 days dead in a tomb before rising from the dead.)

That was a Thursday. On Friday, it crossed the minds of the Jewish leaders that Jesus had promised to rise from the dead.  Since coming back to life was not humanly possible, they were sure Jesus’ followers might sneak back at night, rob the grave, and then say Jesus had risen from the dead.

They immediately sent to the Governor so that tampering with the tomb could be prevented.  You can read about it in Matthew 27:62-66 -- I'm not making this up.

"The Jewish leaders gathered together to Pilate (the governor), saying, ‘Sir, we remember, while He was still alive, how that deceiver said, "After three days I will rise."’ Therefore, command that the tomb be made secure until the third day, lest His disciples come by night and steal Him away, and say to the people, "He has risen from the dead." So the last deception will be worse than the first.’

"Pilate said to them, ‘You have a guard; go your way, make it as secure as you know how.’

"So they went and made the tomb secure, sealing the stone and setting the guard."

(No Easter bunny - history is all about proving Jesus' resurrection without a doubt.)

First, there was a huge earthquake. Then, a shiny and very buff angel showed up and rolled aside the massive stone door.

The tomb was utterly empty, all except for Jesus' neatly folded face cloth, and the empty mummy-like burial wraps, stuffed with embalming spices.  He had indeed vanished out of the grave.  The angel was there to reveal the empty tomb and to let people know a very-much-alive Jesus had headed up to the region of Galilee.

The knees of all four of them knocked together so badly that they collapsed to the ground and couldn’t move. They laid there, petrified, while the angel talked to some women by the tomb.

(No Easter bunny - history will show God's love because of Jesus' resurrection.)

When the paralysis lifted, the soldiers hurried back to the Jewish leaders and told them everything.  Earthquake, angel, Jesus gone -- the whole works.  They had been powerless to prevent Jesus’ escape from the tomb, and no, the disciples never showed up.

I can just hear the leaders swear.

(Those words are not in the Bible of course, but I'll bet their mood was blacker than curses.  No Easter bunny - history is about demonstrating that you can't win when you try to fight against an almighty God.)

They finally pressed a "large sum of money" into the soldiers' hands, and commanded them:

The excuse was fatally flawed, and no one realized that fact more acutely than the soldiers themselves. Sleeping on the job was unforgivable; the penalty was always death. The chance that one soldier fell asleep at the tomb was miniscule at best, but all four at once? Impossible.

"Don’t worry.  If the Governor hears, we’ll win him over and secure your lives."

Money talks.... They risked their lives and took the money.  And apparently they said as they were told, and their lives were apparently secured as promised, because that was the story circulating at the time Matthew recorded the events on papyrus.

(No Easter bunny - history does document Jesus' resurrection beyond a reasonable shadow of doubt...)

Do you realize that because of the seal and the Roman guard, the Resurrection of Jesus Christ is actually the most documented event in history?

Not only that, but a few years later, Paul, a murderer of Christians who became a convert to Jesus Christ, recounted Jesus' resurrection to the people living in Corinth, in Greece:


If anyone had any questions about Jesus having risen to life again, there were a multitude of witnesses to Jesus' resurrection still alive that they could talk to in person.

Why did Jesus die on a cross, lie dead in a grave for 3 days, then rise from the dead?

(No Easter bunny - history proves Jesus' love for the world.)

Because of love for you. He knew your sins would send you to Hell, separated from God.  So, He surrendered his perfect, sinless life and died on the cross so He could pay YOUR penalty.

Jesus' resurrection is your proof that God accepted His payment on your behalf.

Wow, this is way better than
finding the winning lottery ticket.

I give to God my miserable life full of bad choices and eternal torment.  In exchange, I get a new ability to make right choices, I get my record wiped clean, and I get to become God’s kid.

Here’s how Paul, the murderer-whose-sins-were-forgiven, put it:

"If anyone is in the Messiah [if anyone swaps his sins for God’s forgiveness], he is a new creature; the old things passed away; behold, new things have come.  ...For God made Jesus, Who knew no sin to be sin on our behalf, that we might become the righteousness of God in Him" (2 Cor. 5:17, 21 NASB).

Let’s put that in today’s English --

God treated Jesus as though He had lived MY sinful life (punished Him with death), so He could treat me as though I had lived HIS perfect life (and reward me with eternal life).

God wants to forgive me - and you - of all the wrong we have ever done and change our very nature, so we can choose not to sin on earth, and when we die, to go to be with Jesus in heaven.

It’s HOPE, not a cop-out, that leads me to pray, "God, I’m a sinner. Without You I have no hope.  If You’re really there, I need You.  I want to trade my sick heart for Your cleanness.  I choose Your way and I want to be Your child."

Believe me, anyone who honestly prays that prayer WILL get God’s attention, God’s love, and God's adoption into His family.

"For God so loved the world that He gave His only begotten Son,
that whoever believes in Him should not perish,
but have everlasting life.

"For God did not send His Son into the world to
condemn the world, but that the world through Him
might be saved" (John 3:16-17).

I don’t know where you live nor the circumstances of your life, but God does. He is right beside you.  And God will make Himself known to you and will help you as only He can.

Get yourself a Bible or at least a New Testament, and begin reading it.

Need a Bible? Here's one online...

Read the whole Easter story for yourself (the link takes you to Matthew, the first book in the New Testament), and you'll see that not only did I not make anything up, but with all the details that I cannot include here on this page, the story becomes even more wonderful.

That’s the TRUE story of Easter, and it has nothing to do with the Easter bunny.

History unveils, not an egg-laying rabbit, but a Resurrection Day, when God proved to the world that He was satisfied with Jesus' payment for sin and would accept "whoever will come" to Him.

Jesus is risen indeed!  THAT'S why we celebrate Easter.