How the BunnyVac Works, and its Limitations

Vaccine Immunity: How the Pasteurella multocida vaccine, Bunnyvac, functions to protect a healthy rabbit from pasteurellosis, advantages and potential drawbacks.

The following is the substance of interviews and written communications by Mr. Robert Glass, inventor of the Pasteurella multocida vaccine, BunnyVac, which help explain how the BunnyVac rabbit vaccine immunity works.

{My impressions and conclusions, drawn from registered nursing experience, are below in parenthetical italics. Emphases are mine}.

{The pasteurella strains that cause skin and other abscesses therefore are not the ones targeted by the BunnyVac, and the vaccine should successfully target at least “most” of the respiratory strains.}

“The immunity induced by infection or by vaccination is present in the blood stream in the form of antibodies (humoral immunity) and immune active cells (cellular immunity). In many cases the cellular immunity is more effective than the humoral."

{In other words, reinforcing cellular immunity through breeding toward a genetically strong immune system is an excellent strategy over the long term.}

“Antibodies can directly kill bacteria but they also serve to 'tag' bacteria so the immune cells can 'see' them. The cells are very effective because they not only kill the bacteria but also engulf the bacteria, digest it and send pieces out in 'packets' which are taken in by not-yet-activated immune cells which become imprinted with the bacteria's pieces and so join the fight.

“This is also why many rabbits initially have really snotty noses and congestion; this is due to infection in the nasal passages and lungs. The immune response can kill the bacteria in these areas and the symptoms clear. But the bacteria remain in the sinuses. Then the immune response goes into a 'surveillance' mode with a lower number of activated cells and decreased antibody levels. It does maintain a memory of the infecting agent and can be activated by re-exposure. So, the carrier rabbit is asymptomatic until something allows the bacteria to multiply once again. In rabbits this is 'stress' in any of many forms...."

{So, vaccination of symptomatic (sick) rabbits results in elimination of symptoms because the germs in the lungs and nose are eradicated. But at the same time, P. multocida continues to colonize the sinuses. This is called a carrier state.}

“The purpose of the vaccine is to induce a level of immunity in non-infected rabbits so that an initial exposure to live Pasteurella finds them with enough antibodies to block the infection. We do not know what percentage of (vaccinated) animals will emerge from an initial exposure without becoming carriers; that will be the subject of a further study.

"What we do know is that the severity of an initial exposure (in vaccinated healthy rabbits) will not result in death and the degree of disease will be significantly reduced. This implies less infectious snot in the air from sneezing which in turn means less chance that additional rabbits will become infected, especially because they also will have an existing immunity.”

{I have no plans to vaccinate any of my rabbits, at least until all the data is in. Instead, I'll continue doing what I've done for years - support my herd's native health through selective breeding of healthy rabbits only.} 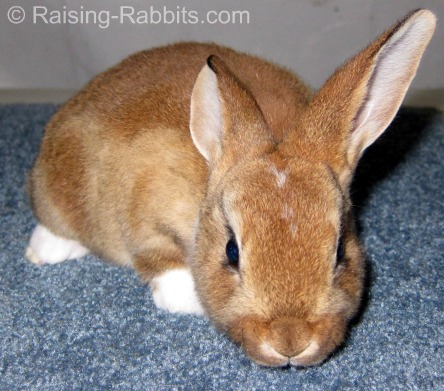 Recent anecdotal reports support the opinion that off-label use likely creates silent carriers of P. multocida. Unfortunately, the following scenario has played out in multiple rabbitries, according to multiple rabbit breeder sources:

The vaccine floods the rabbit with pieces of dead bacteria, which stimulates the rabbit’s immune system to create antibodies to this pathogen. This helps the body to identify and eradicate an active infection in all those areas of the body where the immune system can find the bacteria. At the same time, it is well understood that in areas of low blood flow, for example, the sinuses, the infection continues to safely hide from an immune system onslaught.

As a result, the infection is reduced to a sub-clinical state (appears to be "cured"), and the rabbit’s immune system, if strong enough, rebounds, controlling most or all symptoms. If this rabbit had Pasteurellosis, or was a carrier before vaccination, the vaccination could act as a therapeutic agent which reduces the bacterial load without eliminating it in areas of low blood flow.

For as long as the antibody titer remains high, any leakage of germs from their hiding places results in swift eradication. Should the vaccine "wear off" or the rabbit undergo stress such as a fright or a pregnancy, the once-sick rabbit may become symptomatic again.

For this reason, it is not wise to use BunnyVac in a show rabbit herd.

Until the studies have been done that demonstrate the ability of BunnyVac to eradicate P. multocida, the breeder should not trust BunnyVac to CURE anything.

Remember: the vaccine needs to be renewed yearly.

In a breeding herd, use selective breeding rather than vaccination in order to strengthen the innate immune function in your rabbits.

Imagine vaccinating your sick pet rabbit and all its symptoms go away! With the BunnyVac, according to Mr. Bob Glass, this is a possibility, as long as your rabbit's immune system is at least adequate to start with, and as long as you can repeat the vaccination once a year to keep your rabbit's antibody titers sufficiently high.