Attention, Rabbit Breeders and Pet Rabbit Owners in and near Nanaimo, Comox, Richmond, Delta, BC

RHD has been diagnosed in the feral rabbit population on the Vancouver Island University campus in February 2018, and has spread to the aforementioned areas.

This outbreak is ongoing!

Please avoid going anywhere near the affected areas, if possible, and take careful quarantine measures as you care for your own domestic rabbits, to prevent spreading the virus to your own rabbits!

See RVHD in BC

Rabbit Hemorrhagic Disease (RHD, RVHD, VHD, or calicivirus) is a catastrophic disease caused by a virus.  I pray it never reaches our barn.

The United States is currently free of this virus, however outbreaks have occurred. Aggressive measures have contained and eliminated the threats; this page provides guidelines for breeders and rabbit owners in the western hemisphere.

RHD is endemic in the UK, Europe, Australia, and other countries (outlined below).
See RHVD for guidelines provided to rabbit owners in countries where the virus is endemic.

What are the signs and symptoms?
The disease presents itself in three forms, depending on the virulence of the virus strain and the health and age of the rabbits. The virus is bad news, however some strains are not as potent as others, depending on the area of the globe in which you live:

What causes Rabbit Hemorrhagic Disease?
The causative agent is a virus known as a calicivirus.  The disease was first reported in China in 1984, and has since been reported in most of Europe, parts of Asia, and Mexico (now eradicated). The United States has experienced several isolated outbreaks.  See the map, provided by APHIS, which is dated 2000.

In Australia in 1995, after a laboratory 'accident' that released the calicivirus into the environment, 10,000,000 feral rabbits died inside of 8 weeks. 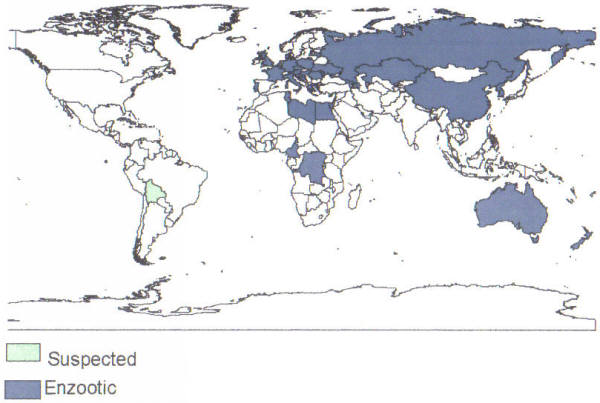 The only good piece of news about the calicivirus is that humans are not susceptible to it.

How does the disease spread?
The virus is sticky.  It spreads very easily by direct contact, biting insects, handling infected rabbit meat and by-products, and touching any animate or inanimate object on which the virus sticks, such as food and water crocks and your own clothes and hands, carrying cages, etc. The virus is hardy - it can outlast heat and cold easily, remaining viable in the environment for possibly 2 or more years. It is highly contagious and easily spread. 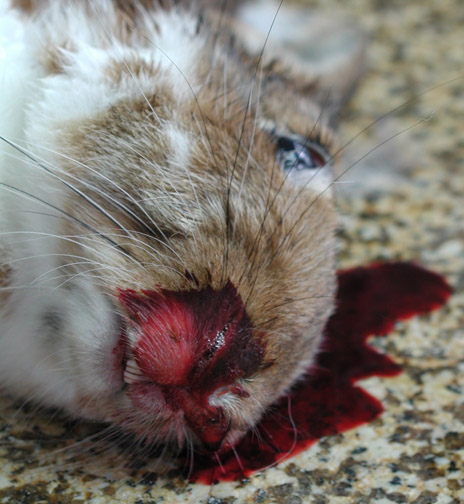 This rabbit has died from RHD

What will a necropsy show?
Tracheal hemorrhages, pulmonary edema (water-logging of the lung tissues) and congestion, petechiae (tiny hemorrhages) on the myocardium, kidney, and spleen, and extensive hepatic necrosis (liver gangrene).

How can I tell if my rabbits are dying from Rabbit Hemorrhagic Disease?
You can make an initial tentative diagnosis based on the rapidly fatal infection and what your naked eye can see on a necropsy exam. But with such a virulent disease, it is vital to call your vet or the USDA so they can arrange for a VHD-specific PCR (Polymerase Chain Reaction) Test - the proving method used to duplicate and then identify the calicivirus definitively - and either confirm or rule out your initial tentative diagnosis. If positive, the authorities will also want to identify where the calicivirus came from and how it got to your herd.

Is there anything I can do to treat my rabbits?
No, there is no effective treatment.

What should I do if I suspect Rabbit Hemorrhagic Disease?

If your rabbits start dying for no good reason, you MUST immediately isolate your herd.

It is believed that the cottontails native to the New World are NOT susceptible to RHD, however domestic rabbits are of the same genus and species as rabbits native to Europe, which are susceptible, and which carry the infection.

The Rabbit Industry Council has prepared an excellent handout on RHD in PDF form. Get the Rabbit Hemorrhagic Disease Info Flyer here.

An isolated outbreak of Rabbit Hemorrhagic Disease occurred in Pine County, Minnesota, in April, 2010. This was the last known outbreak in the United States. It was fully contained.

If you are an owner of one or more rabbits and/or you go to rabbit shows, hear is what to do in the case of another outbreak in the USA, and especially one close to where you live.

In the case of nearby RVHD, should you panic? No.

While frightening in its tenacity and ease of transmission, this disease can be managed and limited in spread by common precautions. It should never be treated lightly or disregarded.

We STRONGLY encourage those in [an area of active outbreak and surrounding areas] to think carefully about any unexplained deaths in their herds and to take the appropriate steps for accurate diagnosis should symptoms and signs indicate any possibility of RVHD. If you have any doubts, contact your State Veterinarian for assistance--or contact the Rabbit Industry Council at 530-534-7390 or RIC@cncnet.com.

We also STRONGLY encourage all shows and exhibitors to use an appropriate disinfectant [see RHD Info Flyer link above] on all coops, carpets, and equipment. If you are uncertain of your herd health status, please stay home until you get it straightened out.