The basics of rabbit coat color genetics focus on just FIVE basic genes, or chromosome locations (loci), that code for coat color.  These genes are - logically - identified as A, B, C, D, and E. As you read on, you'll find the initials actually make sense. 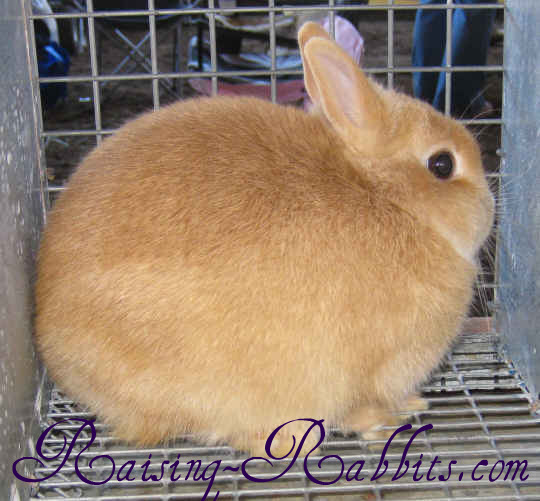 The 5 gene locations act upon the TWO basic colors in a rabbit's coat - black, and yellow - changing how those two pigments get expressed in the rabbit's fur.

Additionally, these 5 genes are acted upon by other modifying genes, rufus factors, and plus-and-minus modifiers.

From all the interactions and modifiers, it is possible to obtain literally hundreds of different rabbit colors.

Some genes produce a color, and some genes turn OFF a color. (Remember - only two colors: black and yellow.)

Above is an example of rabbit coat color genes turning off the expression of the color black (or chocolate) in a Netherland Dwarf rabbit. Amazingly, this orange rabbit is an agouti, with the black (or chocolate) pigment removed. It has two copies of the ee non-extension gene (see E Locus below).

Breeding smartly and with purpose is what this page is about - helping you know ahead of time what you can expect, so your litters will contain the rabbit colors you expect them to contain.

If, as a show rabbit breeder, you randomly mix, match, and breed willy nilly - "I wonder what will happen if I breed Fluffy and Jake together...??" - your herd's rabbit coat color genetics and gene pool might end up almost irreversibly mucked up. This is a case of, "What you don't know now could surely come back to bite, hard, later."

Breed them by all means, if you like, but be careful which animals you retain for further breeding.

A: Agouti hair shaft pattern (or not)

B: Black (or chocolate)

E: Extension of color (or its limitation or elimination)

We’ll look at each of these genes a bit more closely. But first...

Rabbits always get TWO copies of each gene, randomly, one copy from each parent.  Two genes from the A locus, two from the B, etc.  If there are more than two variables at a locus, the rabbit still receives a total of just two from the locus, because its parent each had just two copies.

Capitalized letters almost always refer to a dominant gene, and lower case to a recessive gene.

Geneticists include a "place marker" in the spot of an unknown, second gene copy, represented by an underscore - A_B_C_D_E_ - when writing about a rabbit's coat color genetics.

Since the capitalized code letters represent dominant genes, you cannot know by looking at the rabbit what the second code letter of the pair is. When the rabbit coat color genetic blueprint is not fully known, the place markers are used. A study of the pedigree, and test-breedings if necessary, will eventually reveal the identity of the hidden copies.

Homozygous (homo = same) refers to having 2 identical gene copies. For example, a rabbit that is 'AA' is 'homozygous' for 'A.' A rabbit homozygous dominant at all 5 loci would have a genetic code that reads: AABBCCDDEE. 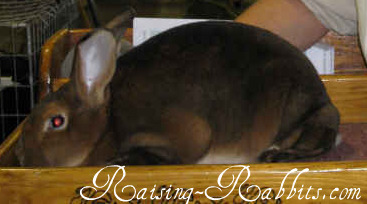 This code produces a black agouti with complete and full intensity of color and correct extension of color along the hair shafts.  In Rex rabbits, this genetic code would result in a castor rex rabbit (pictured).  Netherland Dwarf and Holland Lop breeders call their animals chestnut agoutis. Different names, same genetic code. (But due to differences in normal and rex fur, a slightly different appearance.)

A genotype refers to the full set of underlying rabbit coat color genetic codes - the full set of paired letters describing the rabbit's genes. The genotype in the example above is AABBCCDDEE.

Heterozygous (hetero = different) refers to a rabbit who carries two different gene copies at a particular locus. 'Aa' is heterozygous. A rabbit with the "heterozygous" genetic code AaBbCcDdEe is castor (chestnut agouti), since the dominant letters override the expression of the recessive ones.

Phenotype refers to what the rabbit actually looks like.  Our two castor rabbits above, one homozygous and one heterozygous, both have a "castor phenotype." They are castor rabbits. The difference in their rabbit coat color genetics is this - the heterozygous castor rabbit can possibly surprise you with opal rabbits in the nest box. If you WANT opals, great. If not, now you know the castor carries one 'd' dilute gene, and you can work to eliminate the recessive gene from the breeding program.

In most cases, dominance and recessiveness don't act like mixing two cans of yellow and red paint. A completely dominant gene completely overrides the recessive. You'll see only the dominant color.

Some genes, such as some of the shading genes (at the "C" locus), are incompletely dominant. In this case, you might indeed see a bit of blending. A Californian rabbit ("ch") that carries a recessive 'c' (these two alleles together are written "chc") will have color at the points, but that color may be a bit faded, and cover a smaller area than it would if the animal were homozyous for the himalayan gene ("chch"). 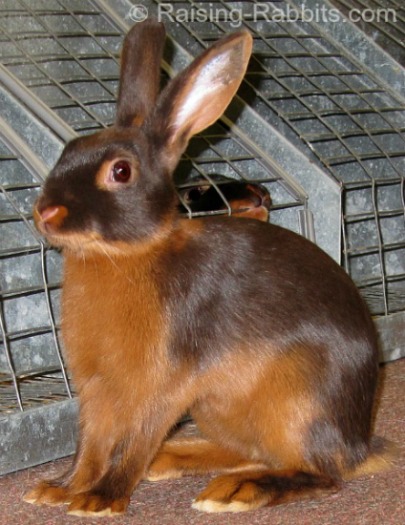 Genes in the agouti series (A) of rabbit coat color genetics determine the pattern of the hair shaft, without influencing the actual rabbit color.

'A' is the dominant gene at this locus. The original wild agouti rabbits of Europe carry two copies of this gene (AA).

There have since occurred two more mutations at the A locus:

at produces a tan-patterned rabbit. It is recessive to 'A' but dominant to 'a.'

a produces a completely solid-colored rabbit from stem to stern, top to belly. 'a' is completely recessive to both 'A' and 'at.'

Pictured is a Tan rabbit, the breed, showing a very nice tan pattern 'at' in its coat. The fiery red color on the belly is the result of the recessive 'ww' gene in addition to the 'at' gene that defines the coat pattern.

Full discussion on the A-locus rabbit colors is here. 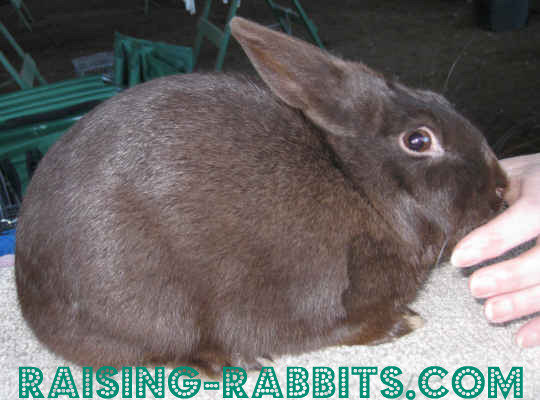 The full discussion on the B-locus rabbit colors is here. 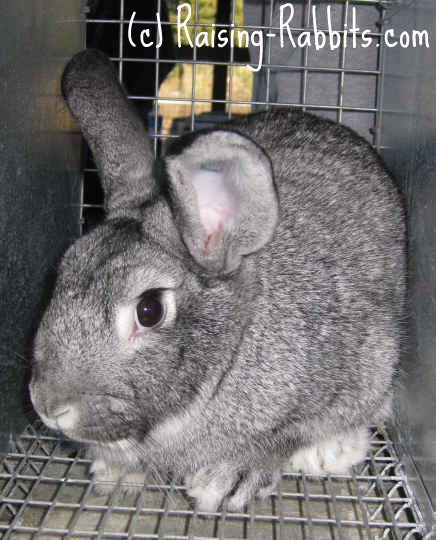 Mutations at the ‘C’ locus result in rabbits with varying degrees of shading, temperature-sensitive coat color, and complete albinism, or lack of pigment.

Rabbit coat color genetics gets more interesting at the 'C' locus. These are the various genes your rabbit could inherit at the ‘C’ locus: 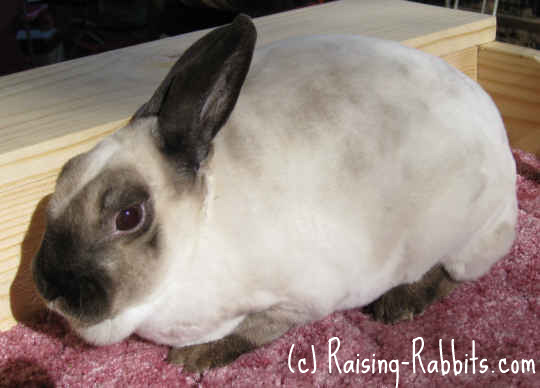 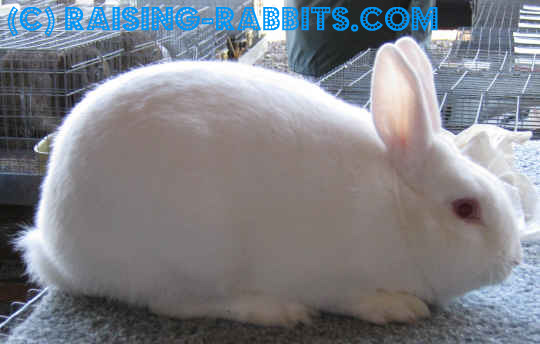 Let’s take our agouti rabbit (AABBCCDDEE) and give him a brother carrying ‘cc’ at the C locus. AABBccDDEE.

Despite carrying all the agouti and other color genes, all you'll see is a Red-Eyed-White (REW), because the 'cc' squelches any color expression.  He still has the AA, BB, DD and EE under the white; breed him with anything other than another REW, and you’ll start discovering the mysteries under that snow-white coat.

Because ‘c’ is completely recessive, you can KNOW that both parents of a REW carry at least one ‘c,’ even if they are fully colored.

Despite the fact that there are 5 options at the C locus, your rabbit will inherit only two of them, one from each parent. 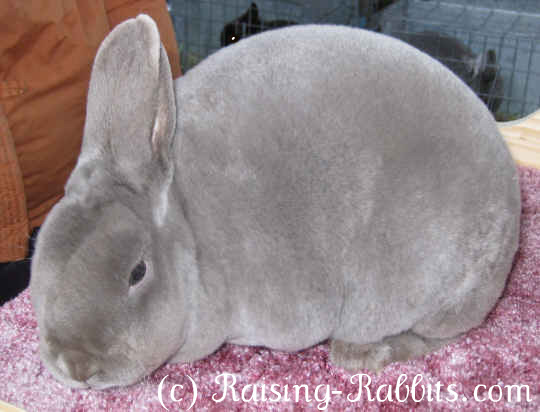 Given that the dilute ‘d’ is completely recessive, any dilute rabbit must have received a ‘d’ from each parent, and must carry a genotype of ‘dd.’

The rabbit pictured here is a self lilac mini rex rabbit. Just from the color we can see, we know it carries aa, or solid 'self' coloration at the A locus, bb or chocolate at the B locus, and dd or dilute at the D locus, which dilutes the chocolate to lilac.

It's pretty much as simple as that.

Every rabbit comes in one of these 4 colors: Black, Blue, Chocolate, or Lilac.

The full discussion of the D-locus rabbit colors is here.

E: Extension of color (or its limitation or elimination)

The E locus acts ONLY on black pigmentation.

Normal extension of color (Capital E) results in correct undercolor, correct ring color and width, and correct outer ring (tipping), by not interfering with the functions of the A and C genes.

3 mutations (that we know of) have occurred at the E locus.

These are all changes at the E locus.

The full discussion of the E-locus rabbit colors is here

Discussion of the steel Es gene is here

All domestic rabbits come in the same TWO pigments - black, and yellow. But tons of different and dramatic colors have resulted from breeders knowing how to identify and combine the various groups of rabbit coat color genetics.

Now it's your turn.

Do your rabbit coat color genetics research, plan your breedings carefully, and then win at the shows with the lovely rabbits that result!