The B-locus is fairly easy to understand. ‘B’ stands for ‘black.’ ‘B’ genes determine the intensity of the black pigment. There are just two options of B-locus genes that we know of:

Wild European rabbits are all black-based. They are agoutis, with black tips on the hair shafts, and a slate gray undercolor, which is correct for a black-based rabbit.

The chemical that produces black color is called eumelanin.

Somewhere in the shrouds of history, a recessive mutation occurred that affected the ability of the black pigment molecules along the hair shafts to produce mature eumelanin. The mutation disables a pigment enzyme, and the result is immature, or weak, pigmentation production.

Note - ‘weak’ does not mean dilute in this case. ‘Weak’ means not as strong or as intense. (The dilute genes are at the D-locus.) 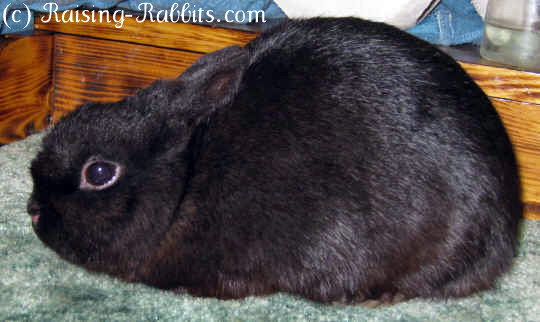 A self black Polish rabbit (aaB_)

The recessive ‘b’ gene results in a dark brown coloration, instead of black (‘B’). Today we describe that color as ‘chocolate.’

Instead of slate-gray, chocolate ‘bb’ rabbits have a lighter, dove-gray undercolor due to the same immature pigmentation.

Being completely recessive, chocolate and chocolate-based rabbits all have ‘bb’ at the B-locus.

Black rabbits may have ‘BB’ or ‘Bb.’ If the pedigree cannot reveal the identity of the second ‘B’ gene in a black rabbit, the only other method of discovery is to test-breed with a chocolate rabbit. Any chocolate offspring means the genotype of the black rabbit is ‘Bb.’

A, B, C, D, and E genes, working together, produce a multitude of rabbit colors, but without fail, these are either black-based or chocolate-based. (Even the recessive, colorless REW and BEW have B or b genes under the white coats.)

Notice that both self (aa) and chocolate (bb) are recessive, which is why there is no doubt as to the genotype of a self chocolate, at least regarding the aa and bb genes.

Those pigments are black and yellow (not black and chocolate).

Both black and chocolate come from eumelanin. Black is full-strength eumelanin. Chocolate is immature, or weak, eumelanin.

Yellow, including all the shades of orange and rufus, come from pheomelanin, the name of the other rabbit pigment.

The B-Locus affects only the eumelanin in a rabbit -- the intensity of the black pigment, whether pitch black or relaxed chocolate.

The rabbit pictured at right is a black himalayan - a black rabbit with C-locus genes that eliminate most of that black, except at the points.