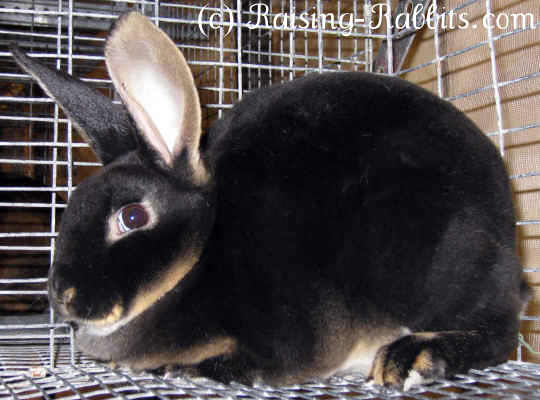 Last year around Thanksgiving, I bred together an excellent pair of show-quality animals, expecting baby bunnies 31 days later.  But 33 days passed and no happy event.

As unusual as this was - rabbits are usually punctual to the day - the doe also showed no signs of pregnancy.  Her abdomen was as flat as ever, and she had no interest in the nest box.

Oh well, I thought, looks like no pregnancy this time, and I tossed a handful of hay into her cage.  The doe went about munching the hay placidly while I fed the rest of the animals.  When I tossed hay to the buck, durned if he didn’t start collecting the stems in his mouth.  He carried the mouthful around the cage and scrabbled with his claws at the wire floor.

"You’re s’posed to eat it, dude!" I suggested, in English.  I watched him, nonplussed.  I’d never seen a buck do that.  Besides, it looked like he had started putting on some weight.  I’d better cut him back on his feed, I mused.

The next evening when I went out to check on the animals, the doe still hadn’t touched the nest box.  But that silly buck was actually pulling fur out of his sides and tummy, and had amassed quite a pile.  It was very clear that he was trying desperately to build and line a nest with the fur.

Currently the best commercial rabbit food available in the USA:

Sure enough, the ‘buck’ had the doe’s ear tattoo.  After breeding 33 days before, I had removed the buck from his cage, instead of the doe, and put him in her cage, since they looked very close to identical.

I laugh now at this rookie mistake.  In 30 years I had never made such a goof.

I was very lucky.  That night the doe gave birth to 5 lovely baby rabbits, one of which went on to win 11 champion certificates ('legs'). The black otter rabbit pictured above is one of those 5 kits.

I shudder to think that a little airheadedness nearly cost an entire litter, except for the behavior of the doe. 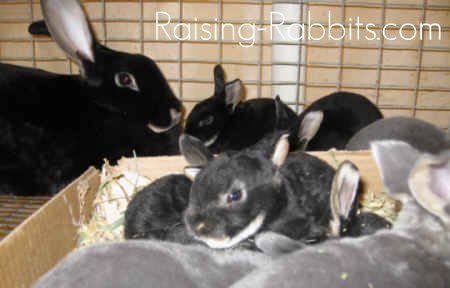 In case you're unsure about what rabbit behavior to watch for when you think a doe should be pregnant, we have identified five different types of behavior clues that could indicate a doe is pregnant.

We regularly rely on one or more of these signs to help us verify whether or not our does are in a motherly-way.