No matter where you live, summertime means your rabbits may be stressing in your area's summer heat is brutal.

Unless you keep your rabbits in an air-conditioned space, heat can literally place your rabbits’ lives at risk. 85 degrees Fahrenheit (29.44 degrees Celsius) is just about the maximum temperature at which your rabbits remain relatively unstressed. At temperatures over 90 degrees (32.22 degrees), rabbits can die.

Cooling rabbits in summer becomes a critical issue, because the effects of heat stress are cumulative.  Don’t let your rabbits’ survival fool you. If they survive days one and two, they may be dead by day three of a heat spell.

Bucks
Temperatures over 85F for several days in a row can cause temporary summer infertility (sterility) in bucks. There's nothing magic about 85F however. Much will depend on your individual animals. Young bucks 6-8 months old might remain fertile throughout their first summer, while unacclimated bucks could become temporarily sterile just as soon as the temperatures begin to climb into the mid-80's. The heat is harder on older bucks than on newly mature ones.

The excellent cooling measures below may enable your buck to continue to sire litters through the summer, if he will avail himself of them. Institute cooling measures when the ambient temperatures hit 85F, even though they may not yet appear to be the slightest heat-stressed.

The infertility typically lasts roughly 3 months. In bucks that have gone temporarily sterile, the length of the heat wave and the extent of the buck's exposure to excessive temperatures will give some indication of when his fertility will return. You can expect a buck's infertility to last 1 - 1.5 months beyond the point that temperatures have returned consistently to a range below 85F.

Does and Kits
Heat is particularly rough on pregnant and lactating does and young kits.  The does are already stressed from growing and feeding their babies; even moderately high temperatures may trigger heat stroke and death.  You’ll know the kits are in trouble when they crawl out of their nestbox burrows, lie sprawled about, and pant like crazy.

What to do for babies in the nestbox:
You can bring the nestboxes in the house during the worst of the daytime heat, returning them to the doe in the cool of the evening.  The doe will be just fine with this, most likely.

Both does and kits fare excellently when housed under a misted shade cloth canopy or a purchased carport canopy or party tent. See below!

Cooling Rabbits Under a Shade Cloth Canopy Topped with Misters

Depending on the size of your rabbitry, any of the shade cloth products here should serve you well.

Short of an air-conditioned barn, this might be one of the more ideal solutions for cooling rabbits.

When we lived in the desert of California, our main method of cooling rabbits was shade cloth and misters.

I made a support framework of 1/2 inch schedule 40 PVC arched into a semi-circle over my rabbit cages. It was plenty tall for me to walk under - probably about 10 feet at the peak. I used 4-foot lengths of 1/2" dia. galvanized pipes (used, if I could find them) sunk in concrete as anchors for the PVC framework. The bell ends of the PVC slipped right over those pipes up to the end of the 'bell.'

(The scaling of the picture is off -- at 20 feet wide, the PVC frame could protect several banks of rabbits -- but hopefully the concept is clear enough.) 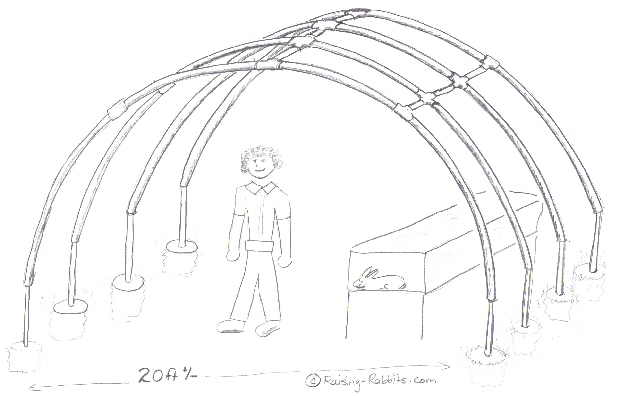 I covered that framework with the heaviest shade cloth I could find, doubled and sewn together. I needed to get quite a bit of it, and fashion it together into one piece that covered an area probably 20 x 20 (feet). See picture below, but I gotta tell you, I don't remember it looking so...nice!

Then I made a mister system, again with 1/2 inch schedule 40 PVC) with very low volume misters placed, I think, 6 feet apart, in three rows, on top of the shade cloth. These were brass misters in specialized PVC fittings in 1/2 inch PVC pipe. Fittings and misters are available from rabbit supply manufacturers. The hose end of the PVC included a pressure regulator, a ball valve, and the hose attachment fitting.

We had no shade trees and no rabbit barn - just this PVC frame with shade cloth and misters. (Again, scale may be off...) 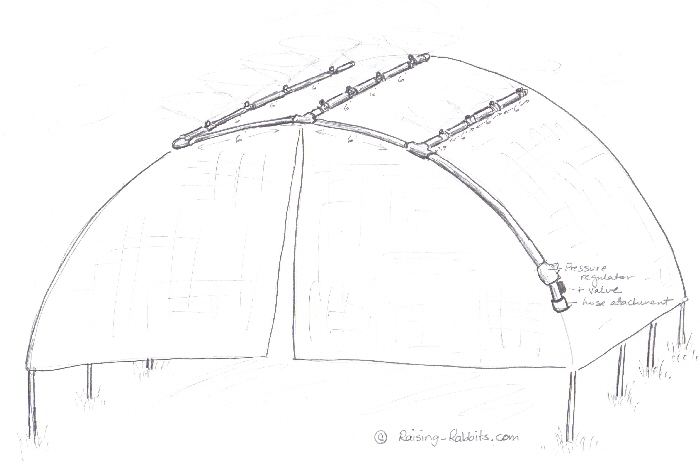 I'm telling you, on the hottest day in the middle of summer, it was cool as a cucumber under that shade cloth. Well, okay...85 degrees...tolerable enough for the rabbits. And me - I hung out there when I got too hot.


Despite the misting, there was no dripping on top of the rabbit cages. Extra water ran along the outside of the shade cloth and dripped on the ground from the edges of the framework. The whole system worked like a charm, and the biggest problem was the ground could get a bit damp - okay, puddled! - after a few days straight of 100+ temps.

Please note that it is very easy to modify these conceptual plans according to the requirements of your own space. However you configure it, just be sure you space the misters as recommended by the manufacturer's specifications - overlapping the diameter of the mister spray.

HINT: It might be just as easy to use a carport canopy as the framework for your homemade shade cloth canopy. Because air cooled by mist can sink through the shade cloth into the rabbits' environment, This method is a very effective cooling strategy.

Nevertheless, I've seen commercial chicken houses utilizing the same principles of misting a solid roof to cool the building. This is why I think that misting a solid canopy (below) might also be equally effective....

Cooling Rabbits under a Misted Canopy

Now that carport canopies and various sizes of party tents can be had for very reasonable prices, it makes perfect sense to house your rabbits in one, assuming you do not have an official barn or shed to keep them in.

(Costco-type canopies work very well for housing your rabbits, feed, shavings, straw, hay, and feed. Here are 3 different sizes; prices seem reasonable for the quality. You can even add a row of sprinklers above the canopy for cooling rabbits and barn.)

At Aurora Rex Rabbit Ranch, we use a set of 3 canopies measuring 20 feet by 10 feet (6 m by 3 m). In Northwest Washington State, there isn't much need for cooling, but I situated misters above the canopies, just like I had done for my shade cloth canopy in the high desert of California, for those few days when the ambient temperatures topped 90 degrees F (32 degrees C).

Click the Pic!
Order your own today!
They make great gifts too!!

Click the Rabbitry Name Links for all the details: