Weaning Rabbits How To’s – How and when to wean, physiological versus physical weaning, and reducing the risk of stress-induced diarrhea after weaning baby bunny rabbits.

Weaning is best done as a process rather than an event. As a general guideline, 5.5 - 6 weeks old is a fine age for beginning the weaning process.

Thanks to natural instincts and capabilities within the genetic DNA of the rabbit, rabbit kits are fully able to feed themselves by 28 days of life (4 weeks). This coincides with the doe’s ability to bear another litter 31 days after the prior litter’s birth.

In domestic rabbits, kits’ milk intake is at its maximum at around 3 weeks of age and it tapers off between 4 weeks and 7 weeks. We call this physiological weaning.

We know that rabbits in the wild physically wean their litters at 4 weeks of age or slightly earlier. This is because they are already very pregnant with their next litter and they simply abandon the 4-week-old kits in order to go off and dig themselves a new burrow. In this case, physiological weaning and physical weaning are concurrent.

At 4 weeks of age, all baby rabbits are more or less physiologically weaned at 4 weeks old, including our domestic rabbits, meaning they are eating and drinking on their own, and getting most or all of their sustenance by feeding themselves. 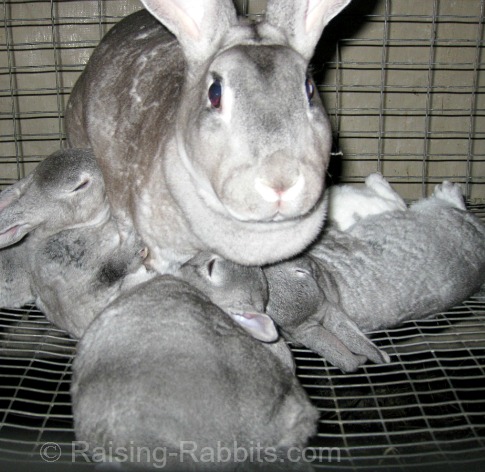 A few more days, and these chinchilla Rex kits will NEED to be weaned!

In modern rabbitries, however, the wise breeder has significant control over which animals breed when. Therefore in rabbitries today, does are typically not re-bred until the prior litter has been physically weaned, or even later. Therefore, the doe may not feel the innate, physiological imperative to drive her bunnies away from her. This is why we typically see does allowing their kits to continue nursing well into week 6 or 7, if the doe is allowed to remain with her kits that long. It's not that the kits aren't physiologically weaned, it is that the doe feels magnanimous toward her kits (if one can attribute altruism to a rabbit!) and doesn't mind them snacking at the milk bar now and again.

(The same behavior occurs in the wild as well - the doe remains with the last litter of the breeding season and allows them to nurse for much longer because she has no more kits 'in the oven,' and won't rebreed for several months.)

Physical Weaning: At some point between 5-7 weeks is when the dam is physically separated from the kits, resulting in actual (physical) weaning.

There's no way to avoid stress at weaning entirely. Weaning causes some degree of stress. Bunnies subjected to too many stressful situations within too short a time are the bunnies most at risk for enterotoxemia - diarrhea - shortly after being weaned.

STRESS is what threatens a weanling's health, not the act of weaning per se.

Weaning by itself doesn't cause diarrhea. It causes stress. (It's got to also be stressful to the wild little month-old baby rabbits in the wild.)

But what if you could reduce the overall stress by weaning your bunnies in little increments over a period of several days?

Bunnies can handle little stresses if the stresses occur one at a time.

Weaning Rabbits: A Week-Long Process rather than an Event 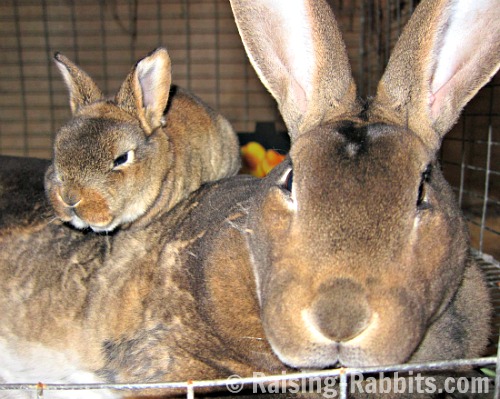 This 2 1/2 week old kit is unweaned. Its sibling died from enterotoxemia due to dysbiosis the day before this picture was taken.

Various iterations of the following ideas have been effective at Aurora Rex Rabbits, but don't think you must follow this schedule rigidly. Consider it an example of how one can separate stressors to the weanling bunnies and help ensure a successful weaning process:

In this fashion, the stress from weaning rabbits is broken into 4-5 stages that stretch over a week's time or sometimes longer.

When these kits go to their new homes, the move will no doubt trigger some stress, but not utter terror.

When weaning rabbits, there is no way to totally eliminate the stress to the bunnies. But by breaking the stressful season into steps, the breeder can reduce or minimize the risk of stress-induced catastrophic diarrhea.